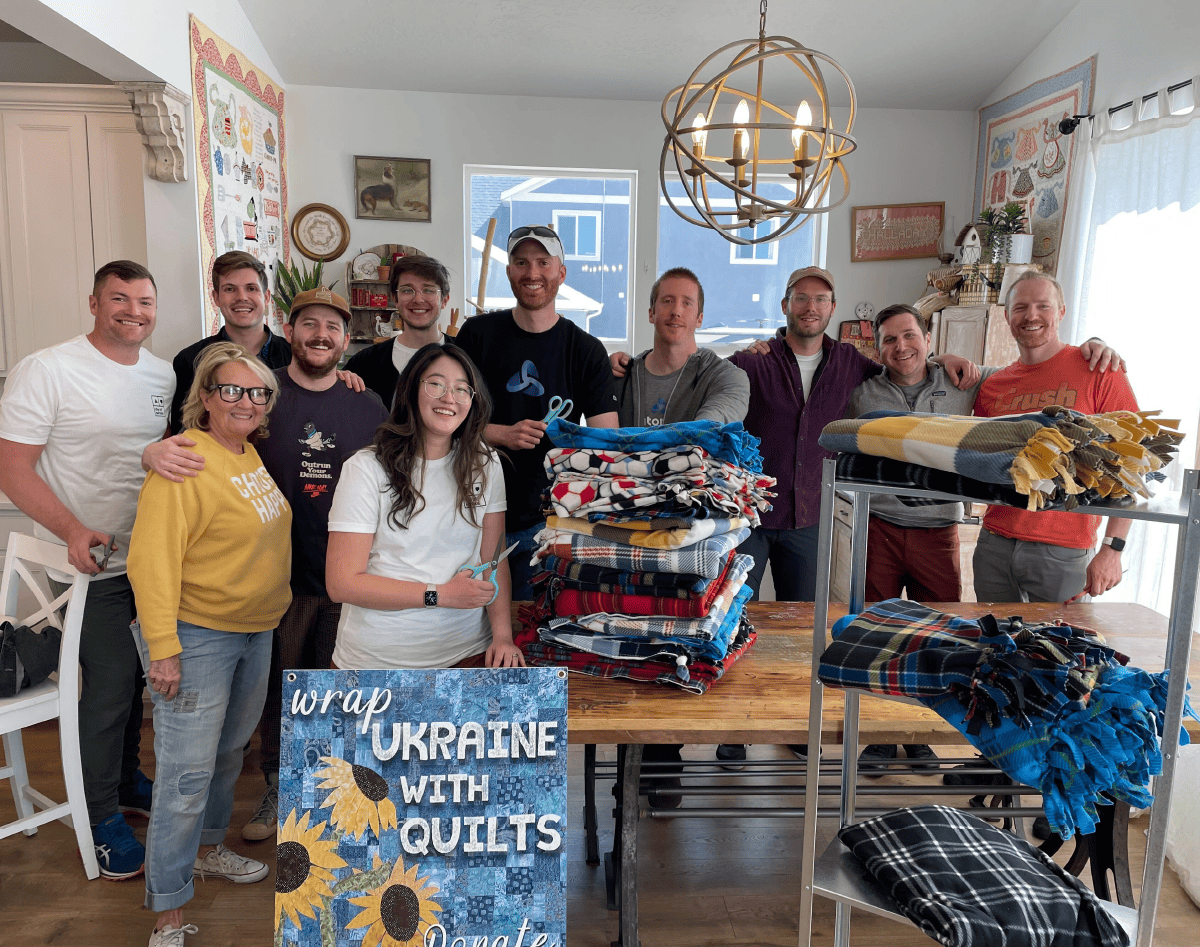 Atomic Gives Back to the Community by Supporting Local Organizations

Jordan Wright and Scott Weinert founded Atomic FI, and have led it to become the tech company they wanted to work at. Just two years later, employees testify that the founders have truly created an environment where employees can do “the best work of their lives.” 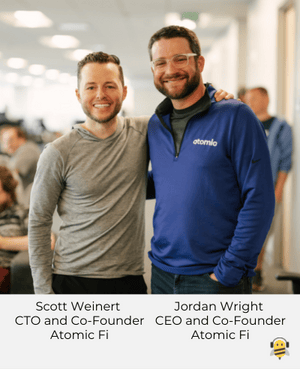 Since TechBuzz's last article about Atomic, the company has doubled its headcount; the income verification and payroll fintech company now has 120 employees. To welcome and onboard the newest members of the company, Atomic put on a three-day, onsite event in Salt Lake City, bringing in all of its employees from around the nation to come and experience Utah together. Most employees had never been to Utah or Salt Lake City before. Bailee Jones, Advisor to the CEO at Atomic, planned, organized, coordinated, and ran the entire event, bringing everyone together to create relationships and experiences that can be hard to cultivate in a remote organization. As Atomic was founded in Salt Lake City, the event reflected Atomic’s love of Utah and its community.

As part of the festivities, Atomic had a company dinner at Square Kitchen, a kitchen incubator space with a unique Utah-based background. 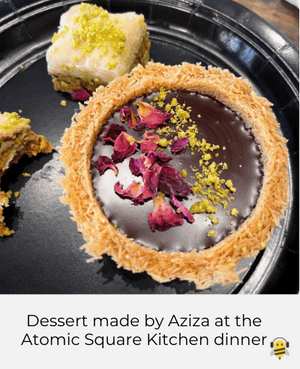 Square Kitchen was founded by Ana Vlademoros and Tham Soekotjo. In 2018, Vlademoros sold empanadas at the local farmers market and found a need for a large industrial kitchen space. She founded Square Kitchen so other startup companies could have a place to expand their business. The goal of Square Kitchen is to help startups grow out of the incubator kitchen and move onto bigger and better things. Now, Vlademoros is the city council woman for Salt Lake City, District one, and serves as the first Latina councilwoman. 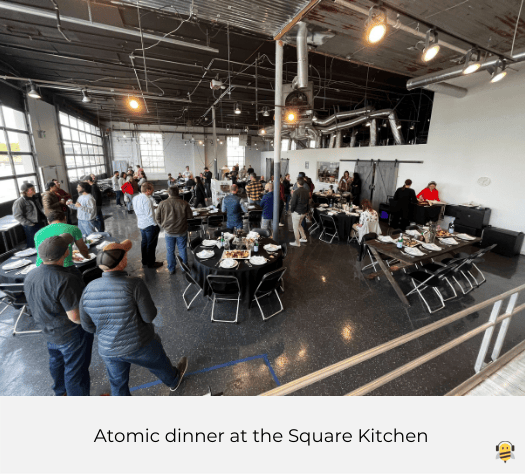 To encourage networking and community, the planning committee made sure everyone sat at a table with people they didn’t know. With so many people, it was a challenge, but brought great rewards.

“I think a lot of good conversations and relationships came out of that, which might not have otherwise happened,” says Michael Stinson, Global Head of Strategic Partnerships at Atomic. “People tend to sit with their teams, so it was a good way to mix it up. Even though we're all part of the company, people still haven't met yet.”

“I was placed at a table with someone from sales, someone from one of the quality assurance teams, and with other developers from other teams,” recalls Xavier Bradley, a software engineer and recent hire at Atomic. “That was a cool way to meet people from other departments that I wouldn't usually brush shoulders with at all.” 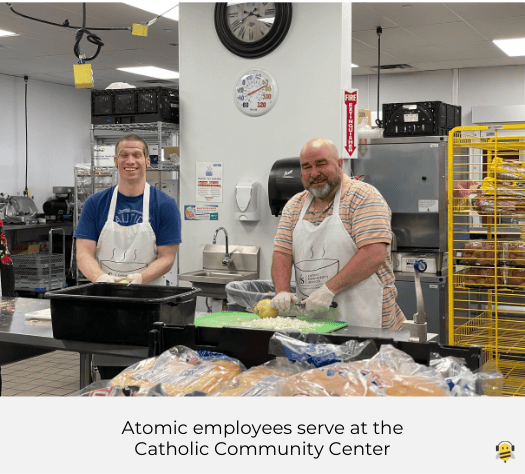 Another part of the onsite event was a service day. The company split into groups and did different service projects around Utah. One group served with the non-profit organization called Wrap Ukraine with Quilts, and helped sew quilts for the half million Ukrainian children refugees fleeing the violence of their homeland. Another group helped Tiny Tim’s Toys make toys for children in need. Another team bought and assembled care packages for Ukrainian refugees with Lifting Hands International and yet another team volunteered with the Catholic Community Services of Utah.

Service is a large part of the Atomic culture. In fact, each employee is given five days a year to spend volunteering any way they want. TechBuzz talked to Katie McKinnon, a research analyst at Atomic, about how she spent her five days of service.

Before working at Atomic, McKinnon worked at the University of Vermont Medical Center with crisis patients. While there, she gained a strong desire to help those with trauma. For her five days of volunteer work, McKinnon became a certified sexual assault advocate at the Rape Recover Center in Salt Lake City. With this certificate, McKinnon can assist and comfort traumatized rape victims by accompanying them to the hospital where they can obtain the necessary evidence to successfully testify in court.

“I'm looking to help women who are incarcerated victims of sexual assault or children who are in juvenile detention centers who are victims of sexual assault,” explains McKinnon. “They don't have the resources to deal with these things. We're taught how to deal with crisis situations and how to support them with the resources that are available in Utah, so I'm looking to get involved in a mentorship program and be that support person.” 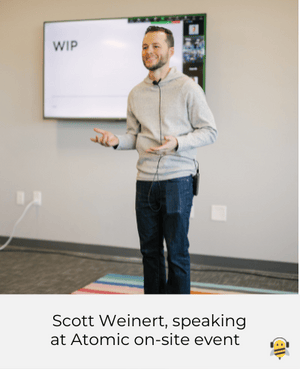 During the event, employees heard from both Atomic founders. Francesca Gallucci, Chief of Staff, explained that even though she was one of the early employees at Atomic, she learned a lot about the founders and their work ethic.

“Scott Weinert, our CTO, did a presentation about who he is and how he thinks and it was the first time I'd heard him  talk about procrastination,” says Gallucci. "I was like, ‘You too?!’ So hearing him share his experience with those struggles and organizing your time and priorities, even after working so closely with him for 18 months, was really important.”

As the company expands, Atomic FI hopes to continue its dedication and service to the Utah community.