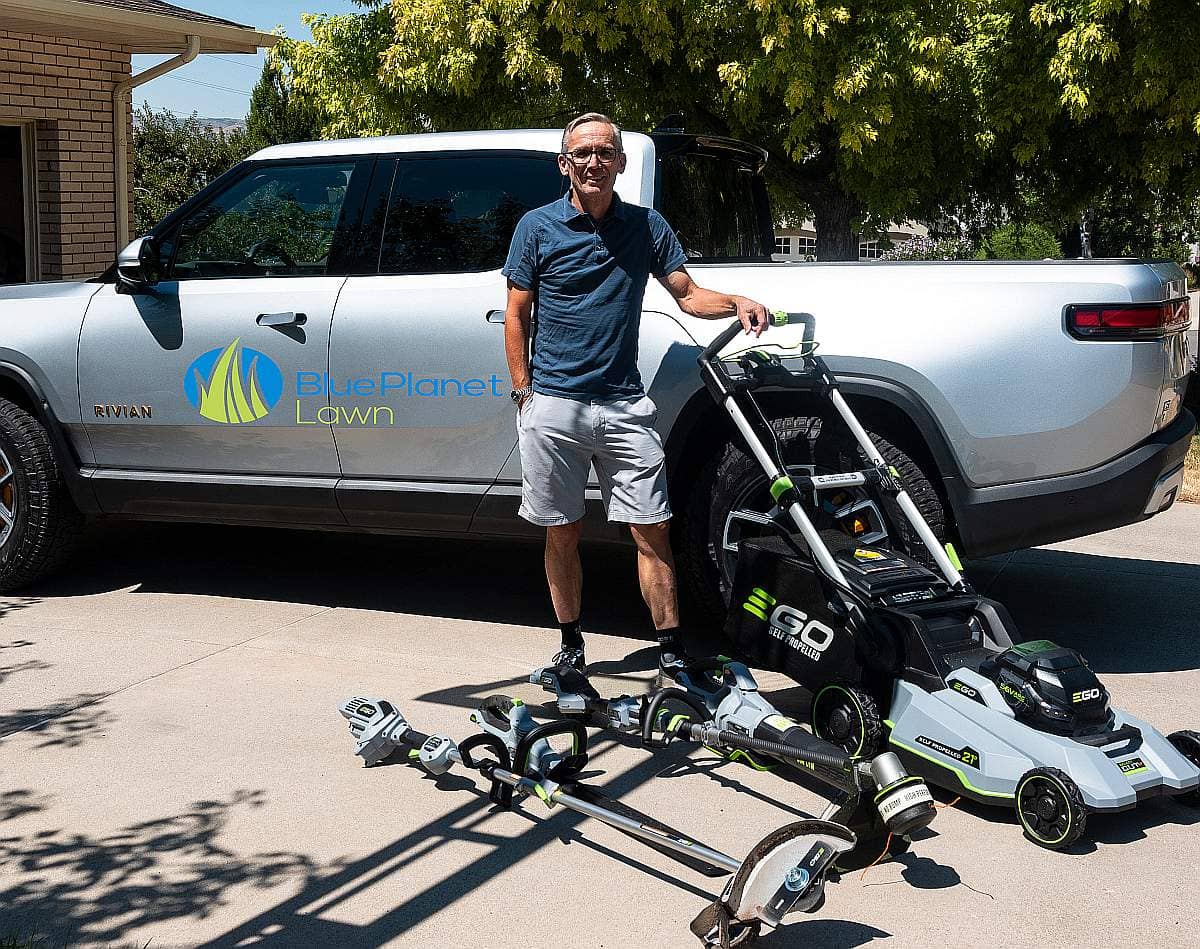 Blue Planet Lawn is Coming for Your Yard – on E-Bikes 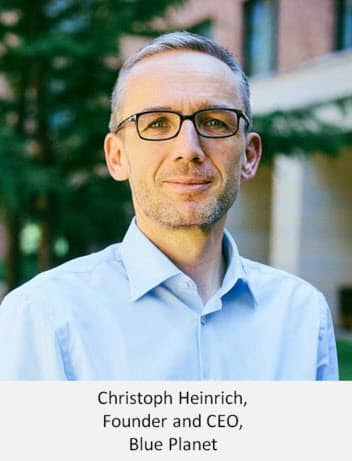 Heinrich took a rather pleasant route to establishing Blue Planet. Born in Zug, Switzerland, he founded a tech company called CM First Group, producing software designed to extend the lifespan of “legacy” coding. He moved to Salt Lake City in 2011 as operations expanded beyond Europe. As the company grew, Heinrich kept shares but stepped down from the board, taking the opportunity to enjoy the Utah Outdoors.

But at the same time, Heinrich was concerned about the Salt Lake City air quality, and was looking for ideas to help improve it. In Salt Lake, he “watched those lawn care companies coming around with those two-stroke engines, which are really loud and extremely polluting, and I just thought, 'that can’t be the way to do this.'”

He attests that battery-powered machinery has evolved to compete effectively against gasoline and oil. “These tools are excellent. They work really well. Electric cars work well. We know that by now.”

Blue Planet’s employees pull a trailer loaded with fully-charged mowers and equipment—about eight hundred pounds—with an electric car, currently a Chevy Bolt. The mowers have enough power to cut four medium-sized lawns, and with recharging between customers, they last all day. A second mower, and spare trimmers and blowers, pick up the task, providing a day’s work at full power. 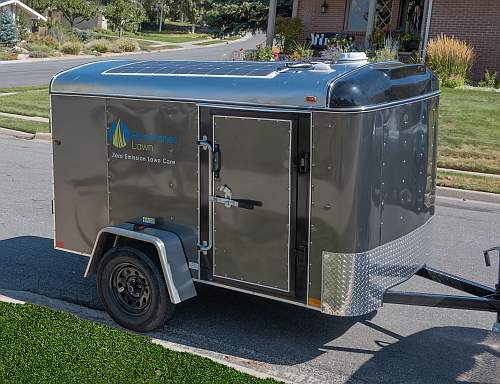 A full-sized electric pickup may be in the company’s future, but in most cases Heinrich believes the haul capacity will be overkill: “I never understood why those other companies show up with those huge trucks and pull huge trailers with everything on it. I think you could have really small, nimble crews … everything you need for one crew and nothing else. That’s enough to serve most of your customers.”

In fact, Heinrich envisions going lighter: “There may be some jobs that need bigger equipment, but some need even less. So what I’m going to build up this week is an electric bike with a trailer that fits everything.”

That includes a mower, trimmer, edger, and blower. The bike trailers’ lids will be fitted with a solar panel for recharging. “And then we’ll have multiple one-person crews just going through the neighborhood visiting customers, which will be so much more efficient than running crews from one yard to another in big trucks.” One truck can haul bikes and trailers to a central spot and launch them to clustered work sites.

The notorious inefficiency of gas and oil powered equipment is well-known yet largely unaddressed. A 2018 study posted by the EPA puts it clearly:

Gasoline-powered lawn and garden equipment … ranging from string trimmers to stump grinders and tractors is a source of high levels of localized emissions that includes hazardous air pollutants, criteria pollutants, and carbon dioxide.1- 4 Workers using commercial equipment are exposed when they are close to the emitting sources several hours each day, several days a week in seasons of use. Other members of the public, including children, may also be exposed to high levels of emissions from commercial landscape maintenance equipment … used routinely around residential neighborhoods, schools, parks, and other public spaces.

Heinrich understands that yard maintenance is a grueling job, but he points out that the lightness of battery-powered equipment diminishes the strain. Blue Planet’s uniforms are designed for practical comfort and sporty presentation. “I don’t think anyone working on the lawn for hours should wear cheap clothes. So, good equipment, good outfits, electric cooler in the trailer for cold drinks … I think it should make the job attractive. I mean, lawn mowing is probably not the most attractive job out there … but I think we can do a lot to make it a good environment.”

Additionally, Blue Planet offers a higher pay scale. Heinrich hopes to provide a sense of prestige to a committed team, attracting loyal, skilled employees. Initial service launched in early September 2022 in Salt Lake City. He views Salt Lake City as a proving ground for his concept but anticipates significant expansion along the Wasatch Front. Lower operating costs allow Blue Planet to offer full service at competitive pricing, so contracting solar powered lawn care won’t mean a hike in seasonal budgets. The only visible difference in results may be that Blue Planet leaves the clippings on the lawn as mulch, promoting healthier grass that grows deeper and needs less water. 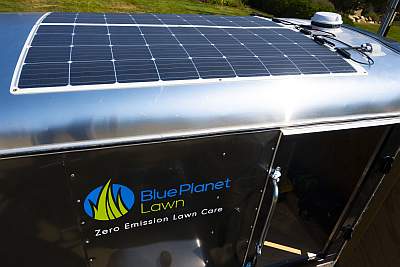 Heinrich points to precedents and mentor groups in other states to support his confidence that Blue Planet is primed for success. Most significantly, he has worked with the American Green Zone Association in California, which subsidizes and certifies companies that convert to electric equipment. Blue Planet’s strategy adds up to a clear – and almost uncomfortably obvious – solution to a matrix of local environmental problems. “So, not only the electric tools … but I think the whole logistics, and how you approach the distance between neighborhoods … that’s where the company is going.”

Heinrich anticipates explosive demand over the next few years. “I’m so excited about this that sometimes I feel like, why is not everybody as excited? But I think once people hear about it and see us in the neighborhood, I think that will have a good marketing effect, especially with the e-bikes.

“Over the winter, we just need to do a lot of marketing, a lot of outreach. The good thing is it’s easily scalable: we have one hundred customers, we need that many crews. We have ten thousand customers, we have that many. And we can meet the demand in terms of equipment and vehicles and people, hopefully. If we have ten crews out next spring, I think that would be really nice – and then, growth from there.”

A promising solution, of course, is not always simple to implement. Blue Planet has launched operations primarily on Salt Lake’s East Bench and in the Avenues. While these neighborhoods are relatively affluent and environmentally minded, many potential clients feel loyal to longtime yard service providers. Blue Planet will have to earn enough trust and confidence for clients to make very deliberate decisions. Even so, Heinrich calculates about twenty thousand potential customers in these two areas alone. Most people he’s approached know very well that blasting noise and toxins into neighborhoods is bad practice. They want the service, but they want to be responsible. “From talking to people, everyone seems kind of ready to do that. They say, ‘Yeah, I know, we really should. That’s so much better.’ So I think the market’s there. The solutions are there.” 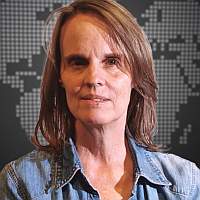 Karin Anderson is a nonfiction and fiction writer focused on people, places, and cultures of the Great Basin.