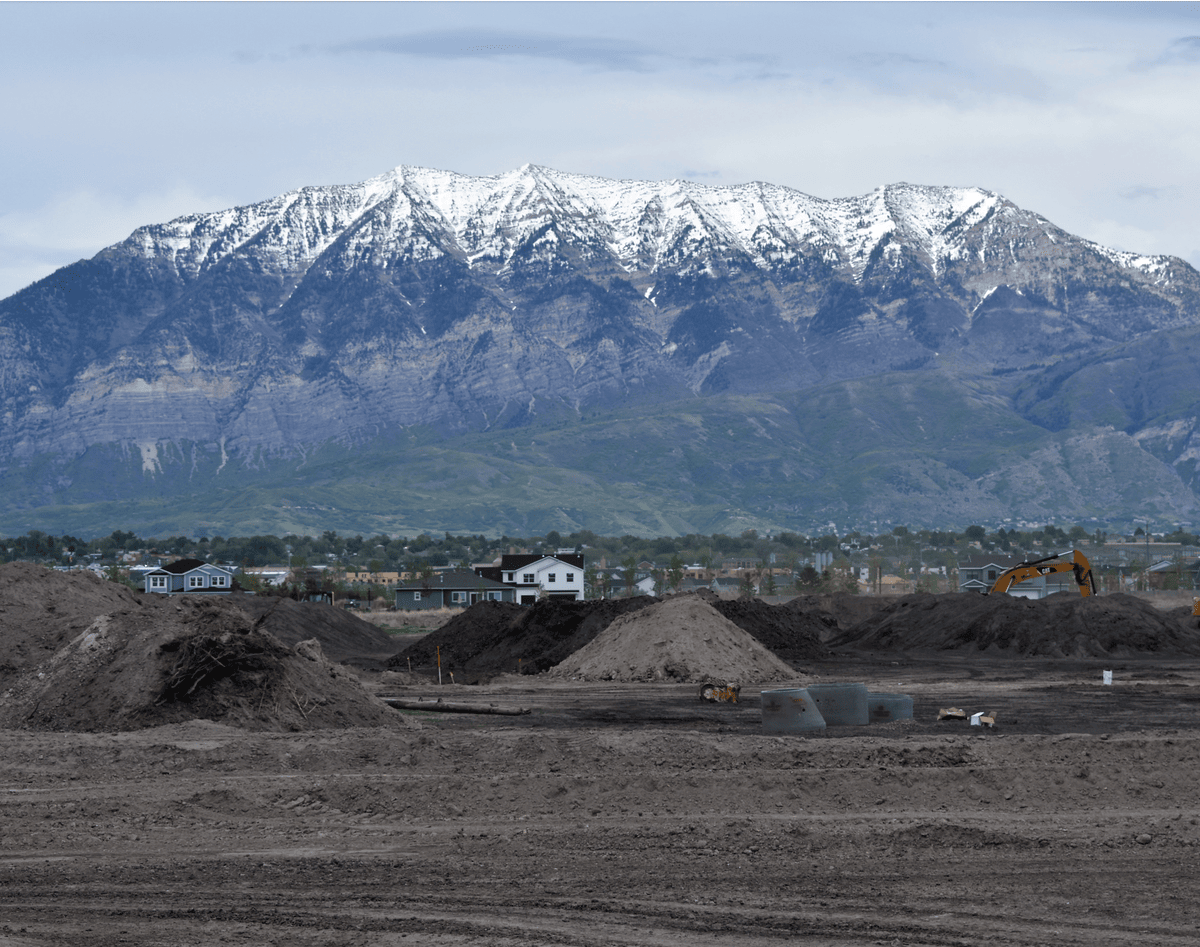 The round was led by Blackhorn Ventures (Boulder, CO), Metaprop (New York) and Tenacity Venture Capital (Atherton, CA). It allows CoFi to process billions of dollars in active loan requests nationwide, helping builders finance more projects by paying workers more quickly. With the new funding, CoFi will help builders address the current housing supply crisis across the country and especially in rapidly-growing Utah, by helping builders finance more projects more quickly and helping them retain workers by paying subcontractors in a matter of days not weeks.

CoFi is a Lindon, UT-based construction loan marketplace that provides debt financing for developers and builders across the country. The company works with a network of partner lenders that provide capital for construction projects, mostly multi-family and residential. The company's software platform facilitates extremely fast payments to workers on construction job sites. "Paying subcontractors quickly is not standard in the construction industry," says co-founder Mike Lacey "We are contractors. We know how important it is to pay people quickly. So we took the payment time from an average seventy four days down to, on average every four or five days." 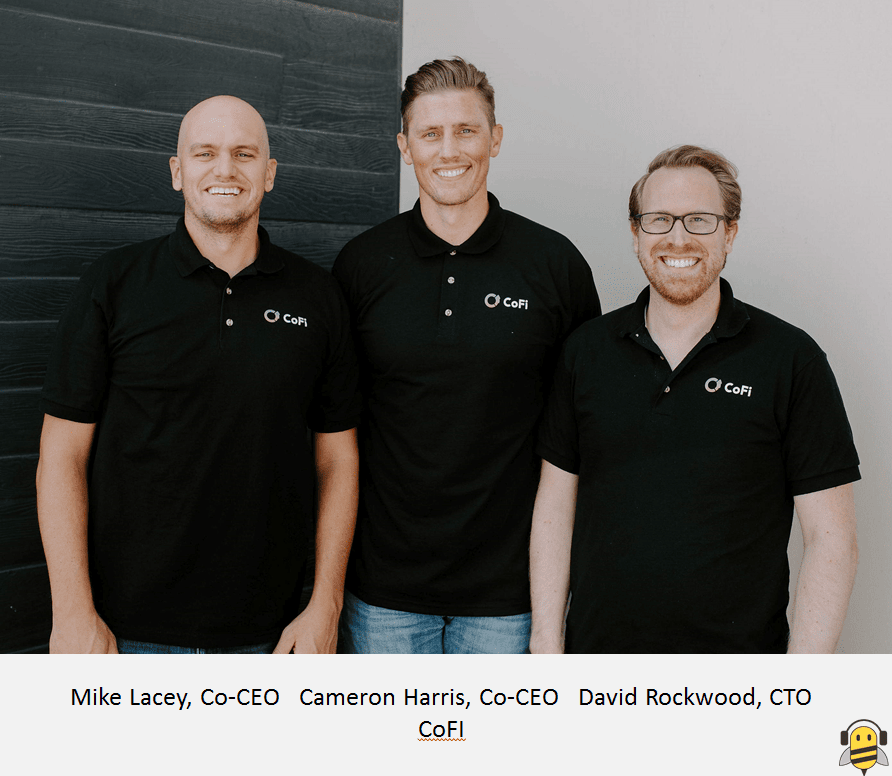 Co-founders Cam Harris and Mike Lacey sat down with TechBuzz and described how they were both construction management majors at BYU, became contractors and by chance met on a job site." "Working together at job sites we compared notes about the painful process of paying sub contractors," says Harris. "We each had stories about sub-contractors and contractors not getting paid on time; they ended up having to stop work, drop everything, drive around for hours picking up checks and hastily paying their workers and suppliers. It was a problem that Cam and I fell in love with and got passionate about. We said, 'hey, let's go try and solve this problem,' maybe naively. But now we are seeing it's starting to resonate, and it's actually changing lives of contractors and subcontractors that need to be paid for their work."

According to the Construction Dive, construction technology funding reached a $2.1 billion in 2021—a 100% increase over 2020. The construction industry represents 6.3% of the U.S. GDP, with millions of contractors and workers on job sites every single day. However, the industry is notorious for delays in paying workers.

A key problem the company had to solve involves inspections and progress payments. Banks do not release funds to the job site until they see proof that work has been completed. Harris and Lacey say their approach is unique in the industry. CoFi has digitized an otherwise clunky and slow loan and inspection process that typically relies on numerous scans and print outs of Excel spreadsheets to show progress on a job site—involving humans that can get bogged down in the details of this complex verification process which then adds weeks and months to the process of paying workers. CoFi has devised a way to use digital image capture and geo-tagging to show digitally in its platform "that the bathroom tile has been laid or that the drywall is up and mounted, giving the lenders the needed proof that the job has been done and triggering the release of funds," says Lacey.

“America is facing a housing crisis unlike any other, which has created an even greater urgency for the construction financing process to run as efficiently as possible,” said Dr. Raymond Levitt, operating partner at Blackhorn Ventures. “CoFi is accelerating financing for both builders and developers from start to finish—something many of their peers have struggled to do at scale. It’s thrilling to see how quickly CoFi has been able to match builders with lenders—even in new markets—and the sheer volume of financing they’re helping to place. This advancement will help propel the construction industry forward at a critical time.”

“CoFi is at the junction of construction and fintech, which creates incredible growth potential,” said Ben Narasin, founder & general partner of Tenacity Venture Capital. “There's competition in both industries, but CoFi is the only company doing both a lending marketplace and industry-specific SaaS payment software. With billions of dollars in loans through their platform in under a year, the opportunity is unbounded.” 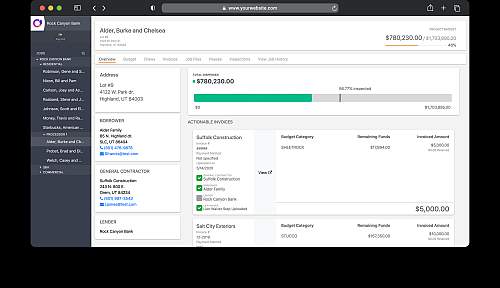 After Harris and Lacey spent their personal money on dev shops to build the prototype, they decided to bring on a professional. "We're contractors. We don't know how to code. We knew we had to find someone who did, so we got introduced to Dave Rockwood, a Stanford Computer Science grad who lived in the Bay Area for ten plus years doing startups and big tech."

Rockwood completed the trifecta and joined as co-founder number three. He quickly threw away 100% of existing code and built from scratch a platform to address the needs of seven distinct types of users: Developers/builders, borrowers, lenders, inspectors, auditors, subcontractors, and servicers. “One of the biggest challenges has been ensuring that both the UI and the underlying backend systems can account for all the unique needs and permissions of users without the code becoming spaghetti,” said Rockwood, who serves as CTO for the company.

He explained how the platform he built is organized:

Having been contractors, Harris and Lacey says they know what builders need to get their projects financed. They landed on the idea of a marketplace after they experimented with being a more traditional SaaS provider. They wanted to address the lending process more completely. "So instead of builders having to go through the process with multiple lenders to see what potential term sheets they'll get, they come directly to us," says Harris.

"We get all their information. We essentially underwrite the project. We have not just a local network, but a nationwide network that can result in the right lending partner working with the builder to find the right loan product." Lacey continues, "We built CoFi into the kind of tool I wish I’d had as a builder—one where we’ve replaced sending inspectors out to a job site with tech driven remote inspections to capture project progress and allow developers to sign off on the distribution of funds. This flexible payment schedule wildly improves upon the industry standard of an average 74-day pay cycle. It can mean all the difference for a builder who might otherwise lose good workers because they can’t get paid quickly enough.”