It's 1999. The music industry is booming. Albums sell at big box retailers for upwards of 30 dollars. A new album debut from a hit artist often draws fans waiting in line outside in the early dawn hours before opening. MTV has huge cultural relevance, with Total Request Live regularly pulling a million viewers per day to see the latest music videos from Britney Spears, Jessica Simpson, the Backstreet Boys, and N'Sync. If viewers are lucky, their favorite artists might even show up on the TRL set for an interview just off Times Square. The Digital Millennium Copyright Act, passed just the year before, means artists and record companies have a huge legal protection against piracy. Things couldn't be better for established industry players.

Then on June 1st, 1999, Napster launched, and nothing would ever be the same.

For Isaac Ellsworth, lead singer and guitarist for the indie band MoneyPenny, the file-sharing platform seemed like a doomsday device for his music career. “Album sales were touch and go in the early 2000s, and I played the victim,” Ellsworth explains. “It was Napster’s fault, our record company’s fault, a full-blown marketing problem—whatever I needed to blame for the internet destroying the music industry.” 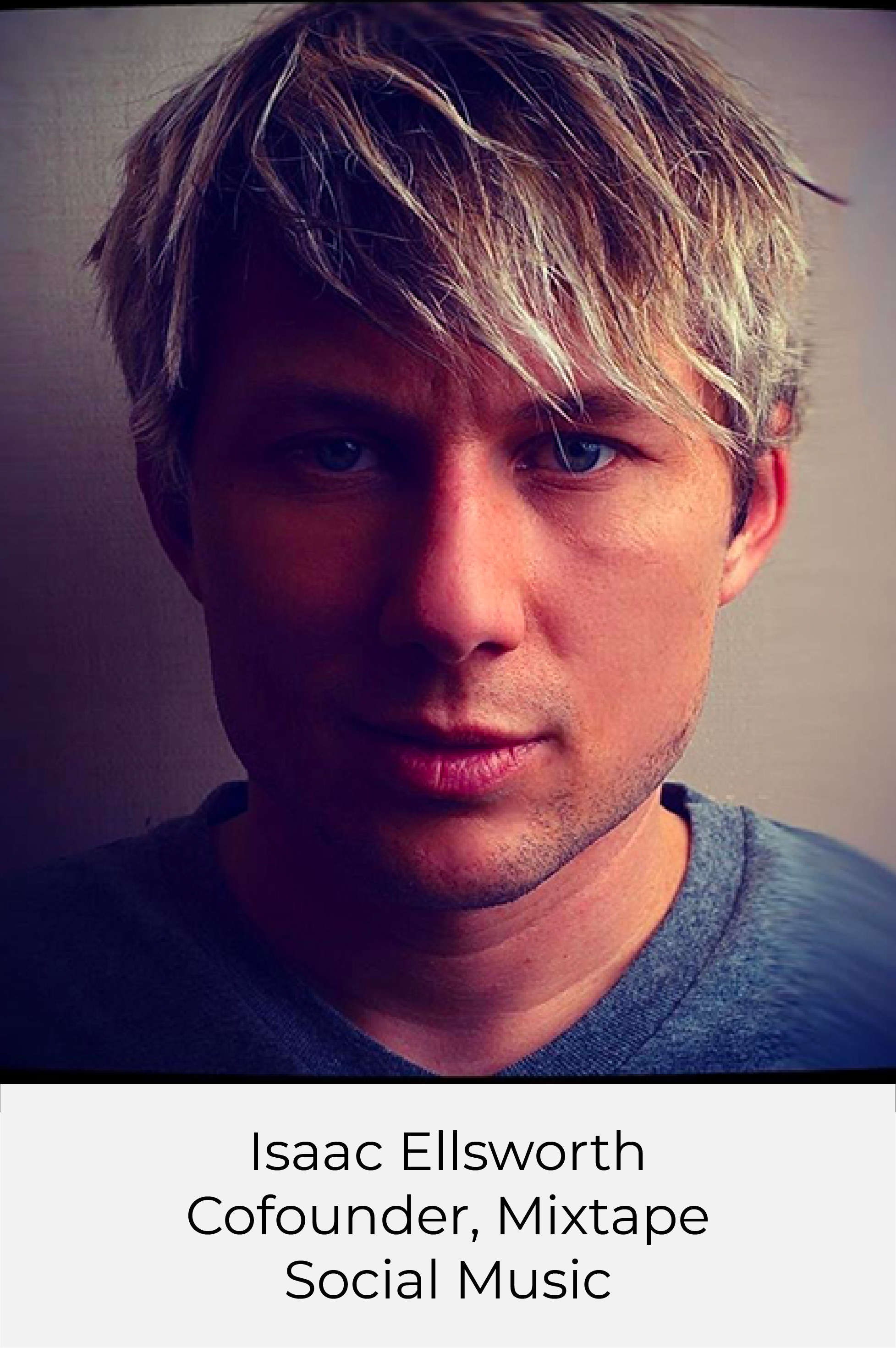 Young and quintessentially-2000s as the band was, MoneyPenny had an analog soul. They sang pop-punk hooks and sold hand-printed T-shirts. They played dive venues and hardcore festivals. And like many bands of the time, they were in the thick of it: Internet piracy gave listeners free access to niche music, touring and streaming royalties couldn’t make up for revenue loss, and a-la-carte song downloads were on track to make full-length CD distribution obsolete.

“The thing I remember was fighting the big wigs,” says Isaac. “Bands like Metallica had their ‘day in court’ with Napster, but it was the little guys most vulnerable to the upset. We made ends meet by touring, salvaging what we could from merch sales and record company politics, but I knew the world was never going back to the way things were.”

Just as a big win seemed unlikely for the era, Ellsworth had an epiphany. “It was 2007 and I had this ‘eureka’ moment. Ironically it was thanks to everything I was struggling with,” he explains. “I was in line at Warped Tour and I saw someone with the first-gen iPhone: this little symbol of how the world had changed, a convenient, handheld device with seemingly endless power. I thought, ‘That’s it. That’s how I’m going to bring back what I love about music.’”

The vision clicked instantly: Use smartphones. Get music out there with a different medium. Start sharing tracks again. Make it human. In an age of iPods and MySpace, Ellsworth had conceived of something both new and timeless: a digital music platform to capture the nostalgia of a pre-digital age.

Ellsworth got the idea for his music-sharing app in 2007, but had no immediate way to develop a prototype. He set the concept aside, the band continued touring, and the era of digital music continued on. Napster was absorbed by Rhapsody in 2011, smartphones went mainstream, streaming apps like Spotify and Pandora rose (and fell) in popularity. It took recovering from an injury in 2019 for Ellsworth to sit down and create the first mockup for what he first named Mix-Tape (hyphenated), a social platform to foster a more curated, personalized experience of sharing music online.

“I messed up my shoulder and had to drop out of touring. I thought ‘OK, do I just take a bunch of painkillers and feel drugged out, or do I go online and teach myself basic coding?’” Ellsworth explains. “I chose the YouTube tutorials. I had never designed software, but I had a lot of time on my hands. After some trial and error, I managed to develop the first (rough) version of the platform.”

Though just a prototype, Mix-Tape gained immediate traction. Ellsworth reached out to legal and industry reps, who in turn gave him time, advice, and expertise. “Everyone was surprisingly generous,” he recalls. “I was pleading for money, of course, but I’d still get time and advice from almost anyone I hounded.”

Brands responded positively to Ellsworth’s concept of marketing a more tailored, aesthetic-driven playlist experience. Even Apple Music, the second biggest streaming service of 2019, was ready to offer a distribution platform. “They were especially receptive to the idea of personalization,” says Ellsworth. “They were looking at new integrations for maps and social sharing, and Mix-Tape seemed to be a perfect fit.”

Ellsworth, met his cofounder-to-be, Dave Williams, through a mutual friend in 2020. Having introduced the first iteration of Mix-Tape to Apple, Ellsworth’s next priorities were scalability and production. He had bootstrapped so far; now he needed the right partner to push the app into its next phase of development.

“Mix-Tape was in motion, but I realized I had to take a step back and see if it was going to be the real thing,” he explains. “The foundation was set and I had worked out patents and trademarks, but I was nervous about the presentation of the app. For one thing, the aesthetics were super rough. The logo was just this ugly, basic cassette tape over a homemade interface. I didn’t like it any more than Apple did.”

With his background in startups, leading companies and exiting, Williams was an ideal partner to move “Mix-Tape 1.0” toward long-term gains. He offered insight on branding, legality, and development, led the Series A round, and connected Ellsworth with industry specialists, helping to define the “movement” as currently branded on their waitlist. 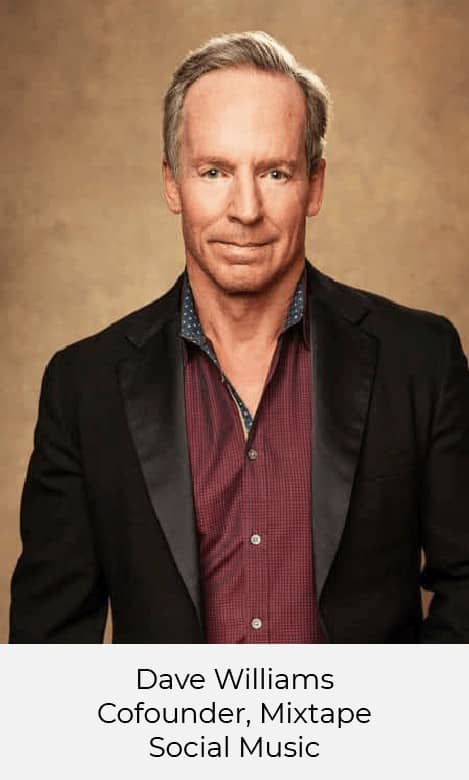 During this phase, Mix-Tape’s biggest transformation was the leap to a fully-functioning social platform. “The way I had designed it,” explains Ellsworth, “the platform was a simple way of sharing music playlists between friends. Dave offered a much more sophisticated vision.” Adding cloud functionality, sharing, and comment features, they scrapped all the original coding and focused instead on a social platform and presentation. (The iOS app, Mix-Tape, was completely set aside, but is still available in the Apple App Store.)

“Isaac and I found each other at the right place at the right time,” says Williams. “Isaac was making excellent progress, and I was excited to be involved with something that had never been done before: a legal means to curate and share music on a social platform. We felt immediately comfortable, the project felt easy—we just knew we could make it work.”

With new funding and development underway, Ellsworth and Williams fully embraced the grassroots angle: Mixtape Social Music (unhyphenated), sharing your story through the power of music. The team is distributed but Utah-based.

Mixtapes of the Future

Having completed its Seed and Series A rounds and officially synced with Apple Music, Mixtape promises a digital iteration of its namesake: a social platform for short, carefully curated playlists, personalized with stories, graphics, and user artwork, endlessly shareable with a growing community of “remix masters.” In a world of infinite content, Mixtape is the anti-streaming of streaming services: a “music box” approach to mood, memory, and medium.

Sponsored by old-school favorites like Coca-Cola and Def Jam Records, the app is now live in full beta on an invite-only basis. You can join Mixtape’s invite waitlist in the link. 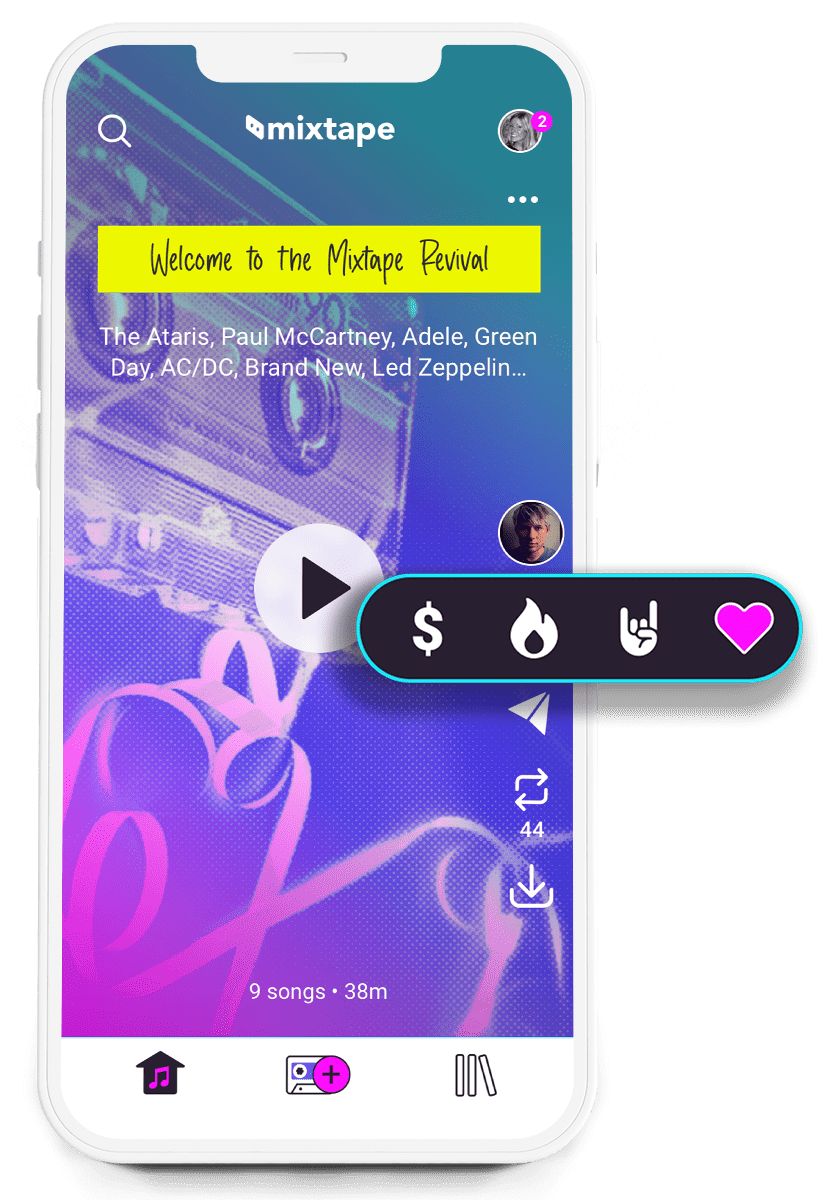 Unlike the current selection of streaming services, Mixtape is a social-first platform for musicophiles. Users add tags and visuals to their track mixes—a tribute to the lost art of interacting with tangible music objects. (Think doodling on cassettes, writing out track lists, smashing an ex-boyfriend’s CD mix—moody stuff 80s and 90s kids took for granted.) It features publishing tools for posts, invites listeners to comment and share—everything sticky about a photo- or video-centric app like Instagram or TikTok, but devoted to your favorite songs.

The moment is right for nostalgia. Vinyl made a record-breaking comeback in 2020. Mixtape-sponsor Nintendo just celebrated the 35th anniversary of The Legend of Zelda. Even Gen Z has deemed corded headphones cool again.

“One way users put their stamp on a Mixtape playlist is through voiceover intros,” says Ellsworth. “Say Paul McCartney has an account and creates something inspired by the Beatles’ early days in Liverpool. He includes tracks from Elvis and Little Richard, chooses his artwork, and records a short narration about that unique moment in time. He can post thoughts about other playlists, keep the conversation going with remix masters he admires, discover new music through his fans. It’s a way of propagating that memory through music.”

“On the far side of complexity is simplicity, and Mixtape has captured that,” explains Williams. “We’re not churning out another social media platform; we’re creating social music. We don’t need any more Twitter wars and Facebook rants. Mixtape is here to get rid of borders and politics. It’s about getting back to sharing music, sharing memories, and sharing nostalgia.”

“That’s the secret of Mixtape,” echoes Ellsworth. “The app is built around sharing, uplifting, and validating its users. It speaks the universal language of music. It’s fun, it makes you smile, it pulls at your heartstrings. It’s old meets new for a 21st century movement.”