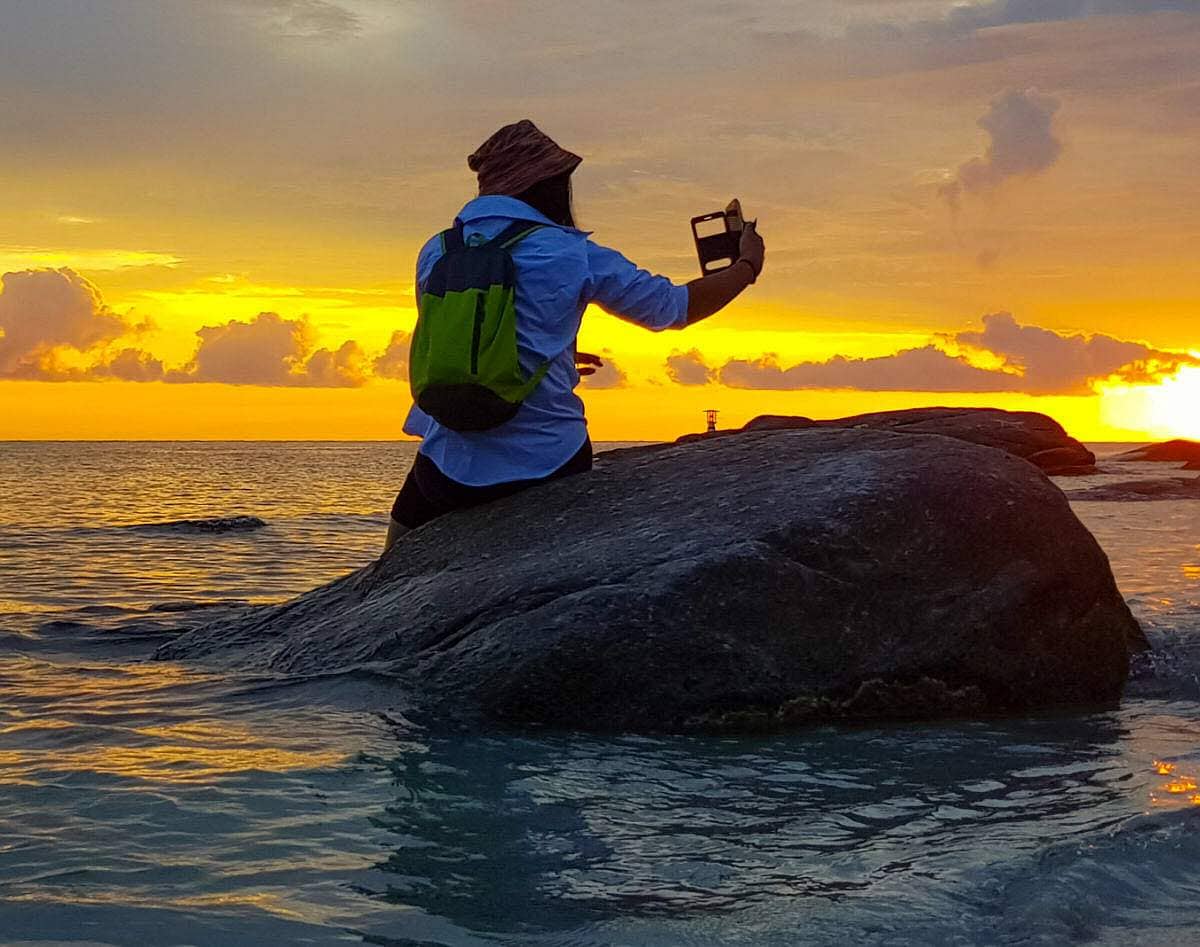 Put the Rice Away: Absorbits Will Save Your Phone

Five years ago, Elliot Harris was washing his fishing boat and accidentally dropped his phone in water. He ran to Best Buy and asked if there was anything they could do to save his waterlogged phone. The workers recommended he try a bowl of rice.

Harris ran home, put his phone in a bowl of white rice. Not only did it not work, but a grain of rice also got stuck in the charging port. That was the end of his poor phone. 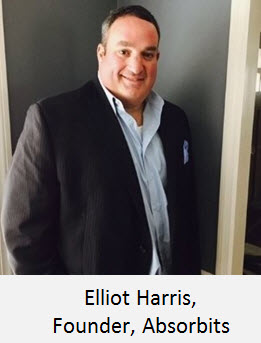 Two days later, he was wearing a moisture-wicking nylon shirt, eating beef jerky and lamenting the loss of his phone and the money he would have to spend on another one when he felt something at the bottom of his bag of jerky.

He pulled it out and saw a silica gel packet, also known as desiccant, that absorbs moisture to keep food fresh. At first he felt a bit bitter. If rice was the go-to solution for wet electronics, why isn’t it put in these packages to absorb the moisture?

And then it hit him: what if he could take the moisture-wicking material he was wearing and layer it with the desiccant or silica gel packet and create a material that would absorb the moisture?

Harris has had no background in material science, but somehow eleven months later he had a utility patent for the material and was creating his first product—the rescue pouch. It was designed to save waterlogged phones like the one he washed. But it soon became obvious that this would work on most hard goods, not just phones.

And that’s how the bootstrapped Provo-based company Absorbits came to be.

“In simple terms, any bag or pouch engineered with Absorbits acts as a vacuum to draw moisture out of your prized possessions—whether they be phones, electronic devices, earbuds, camera gear, hearing aids, tools, firearms, ammo, or many other hard goods that are ruined or damaged when they get wet,” Harris told TechBuzz.

The pouches are portable, reusable, and don’t require electricity to work.

Harris soon handed over the company reins to long-time entrepreneur Romney Williams, who is now the CEO of Absorbits and BONE-DRI, manufacturer of rust-preventative absorbent gun and ammo cases.

“I'm of the opinion that every startup has a great founder story, and I think that's a pretty amazing one,” Williams said. “He solved his own problem with a wet phone. So, our why as a company, our mission is to help people protect their prized possessions.” 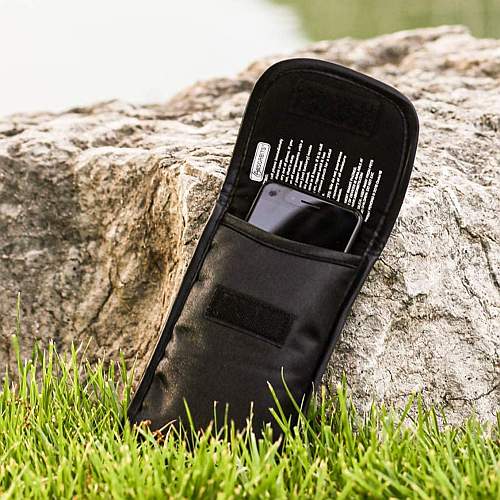 The Absorbits site instructs anyone who gets a device wet to turn it off, remove the case or cover, take out the battery if possible, wipe the device down, place it and the battery inside the Absorbits case, and check in 4–6 hours. If the device is still not turning on after that long, repeat these steps for up to 24 hours.

And when you’re done, you can easily reset the bag by drying it out in the sun, with a hairdryer, or on the lowest setting of the dryer.

Williams and his family have pouches stashed everywhere—the kitchen, their glove compartments, and in their bags—just in case.

During a recent interview, he told us about how he recently went water skiing with a neighbor and some friends. The neighbor had been in the water several times when they realized they had forgotten they were wearing hearing aids.

Williams’s wife pulled out an Absorbits rescue pouch from the bag with their towels and the neighbor put the hearing aids in.

“Sure enough, the next day, they were perfectly fine,” Williams said. “Now, hearing aids are not built to withstand heavy exposure to moisture, and they cost between $3,000 and $5,000.”

And that’s far from the only time the bags have come in handy. Williams said that a customer’s four-year-old son threw AirPods and the Apple TV remote in the toilet in the same week. Neither worked when they pulled them out, but after four to six hours in the rescue pouch, they worked perfectly.

“We have the craziest stories of Absorbits customers and what they've done to save their devices,” says Williams. 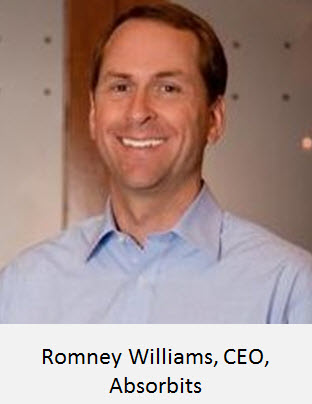 Along with the rescue pouches, Absorbits has a business-to-business (B2B) side, selling its material to other businesses rather than straight to customers.

“I'm currently in exploratory conversations with several major brands and manufacturers in different industries that are totally unrelated,” he explained, citing examples like working with hearing aid companies to make cases or camera gear bag companies. “The opportunity is tremendous because there are so many use cases on the other side.”

And then a year and a half ago, the company expanded into rust-preventative cases for firearms with BONE-DRI, with a business-to-consumer model. Guns are regularly exposed to moisture both during use and during storage, and that leads to oxidation and rust.

“It really feels like a blue ocean of opportunity because in the gun case category over the last fifty years, what innovation in gun cases has there been? Maybe a new zipper, maybe a new camouflage pattern. There are very few ways you can actually innovate, especially in soft gun cases.”

BONE-DRI offers a variety of shapes and sizes for rifles, handguns, and ammo. Williams and Harris go to gun shows and astonish onlookers as they soak a nine-millimeter handgun in a fish tank for hours, then they take it out, wipe it down, add lubricant, and put it in one of the cases, and two to four hours later, it will be dry and completely rust free.

Absorbits is a startup with two employees: Harris and Williams. They have partnered with RevRoad, a venture services company in Provo offering shared services to startups in exchange for equity.

“I outsource as much as I possibly can,” Williams said. “We're lean, but we're definitely playing to win. We believe we have a really big opportunity.”

So far the team has raised money through private individuals rather than institutional investors. And because the utility patent is so broad, they have a lot of ideas and use cases in the works.

Williams’s personal vision is that in five years, every American household will have at least one product that has Absorbits material in it.

“Virtually every house in America has numerous electronics, electronic devices, or prized possessions where moisture is problematic, whether it's musical instruments, remote controls, hearing aids, AirPods or whatever. We can save them when they get wet,” says Williams.