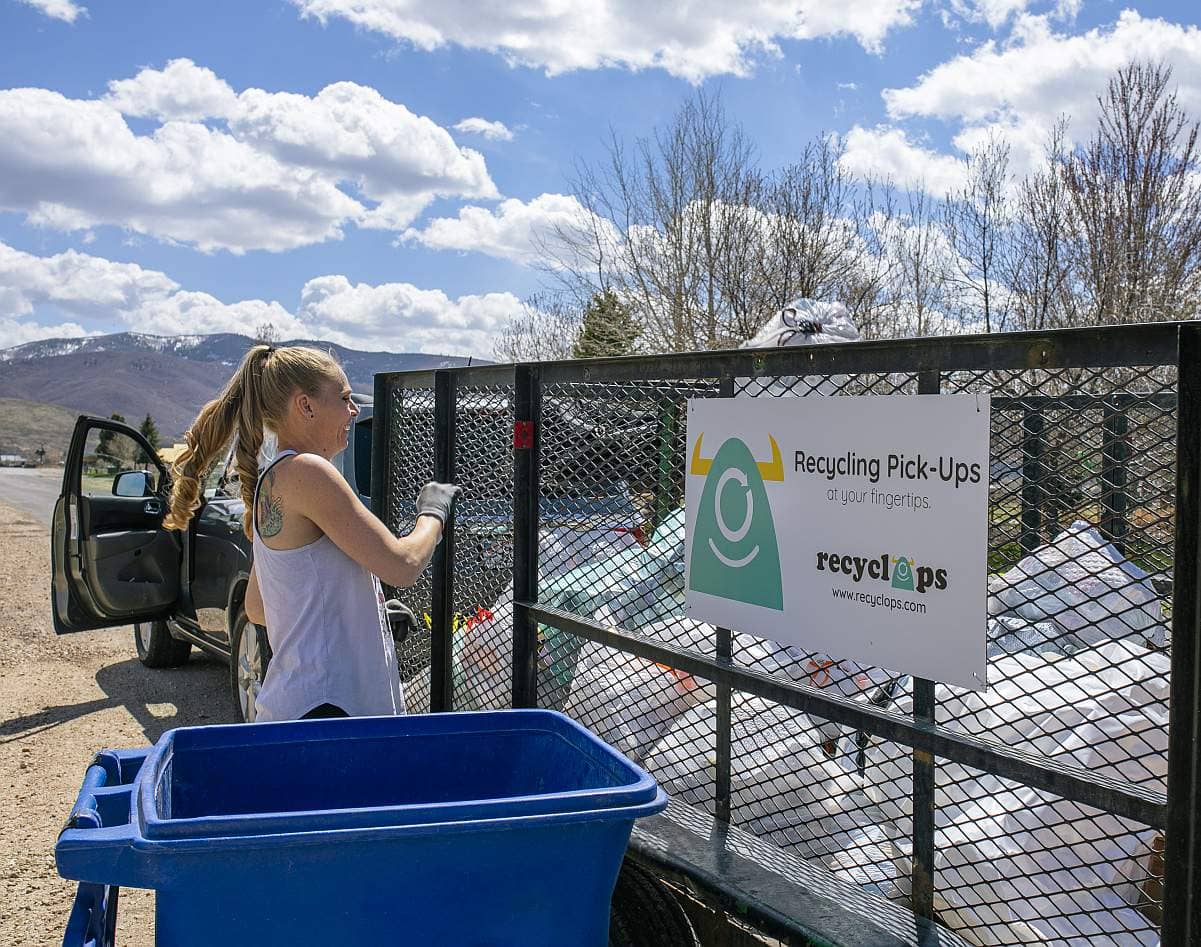 Recyclops’ mission is to make recycling accessible and sustainable for all by bringing it to areas where it doesn’t currently exist. “People still care about recycling. They still want to recycle, even if their communities don’t offer it,” said Ryan Smith, Founder and CEO of Recyclops, a Utah-based startup with 32 employees. “There are just a few logistical challenges that have kept recycling from taking off. We are addressing them.”

The Utah-based startup wants to make recycling easy for consumers, especially in areas where recycling is not generally available. It does this by removing traditional obstacles that have plagued the recycling industry for years.

The capital cost of trucks is an obstacle the company has circumvented completely by utilizing a peer-to-peer logistics solution. “Garbage trucks cost about $300,000 each. And they are built for pickup efficiency, not for hauling material long distances,” said Smith. “So if you have to drive an hour to the recycling facility, it becomes pretty difficult to make recycling economical, especially since big trucks get 2 or 3 miles to the gallon.” 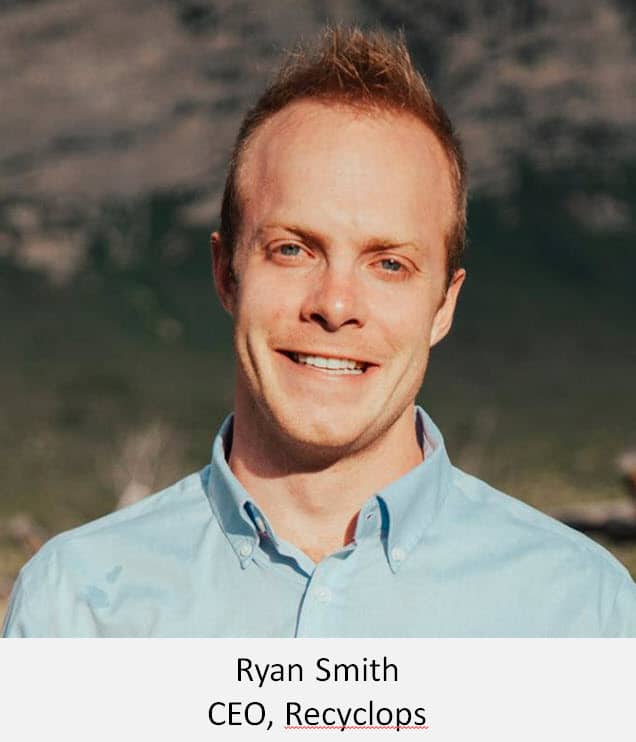 Smith found he could dramatically reduce capital costs by embracing the gig economy concept, similar to ride-sharing companies such as Lyft or Uber, where local independent contract drivers pick up the recycling.  Recycling is bagged and self-contained in transparent bags making it easy for anyone in any vehicle to pick it up. “This approach has enabled us to bring recycling to places that have never had it before,” says Smith.

Recyclops fills in gaps in municipal recycling programs that are missing certain pieces. For example, Nashville doesn't do glass recycling. So the company set up an operation in Nashville to recycle glass in an economically viable way. “We could do the same thing with textiles or hard-to-recycle plastics. The list goes on and on. Our goal is to expand beyond recycling to bring sustainable lifestyle solutions straight to people's doorstep. Recycling is the first logical step for that,” said Smith.

First, many people think recycling is a big money maker, that companies are making money off the material. “Many people think recyclers are double dipping –– charging them for recycling their trash and then selling it and making money on the materials. That's not actually what happens,” says Smith who clarifies it costs more to sort and transport recycling than it's typically worth. “But that doesn't mean that recycling isn't worth it,” says Smith, “The environmental impact is huge. And it isn't necessarily tied to the monetary value of the material itself.”

Second, municipal budgets play a big role in what gets recycled. “Most cities have a set municipal budget for recycling,” says Smith.  “Recycling commodity prices are constantly fluctuating which means the cost to recycle is constantly going up and down. But city budgets aren't built to adjust to that variability, so city managers will often conclude it's justifiable to take the trash to the landfill when the commodity prices are low,” said Smith.

Third, consumer education about recycling is lacking across the board. People often put things in a recycling container that aren't recyclable. Those things don't get recycled. Worse, those things can contaminate other recyclables. Smith points out, “In Utah, glass isn't accepted in almost any recycling program in the state. When glass bottles are mixed in with other recycling, say cardboard boxes, the glass bottle shatters as it’s compacted in this big recycling truck, which results in thousands of little glass shards embedded in the cardboard. Now the cardboard and the glass is trash and will not get recycled. Same with food waste. For example, a milk jug with an inch of milk left in it will leak and contaminate the rest of the recyclable waste. Surprisingly, a lot of dirty diapers somehow make their way into recycling. Even if one dirty diaper makes its way into the big truck that compacts it, it spreads fast. When that truck gets to the recycling facility and the workers see that diaper, they are not digging through the load piece by piece to find the clean pieces. They call in a loader to push the whole thing off to the side to go to the landfill.”

Recyclops confronts these perennial recycling problems head on. “At Recyclops, our most important value is transparency. We want people to be able to trust that their recycling is being recycled,” said Smith. “And as a private business, we don’t have the same budgetary constraints that a municipal waste department would have. For us, as markets go up and down, we ride the wave,” said Smith. 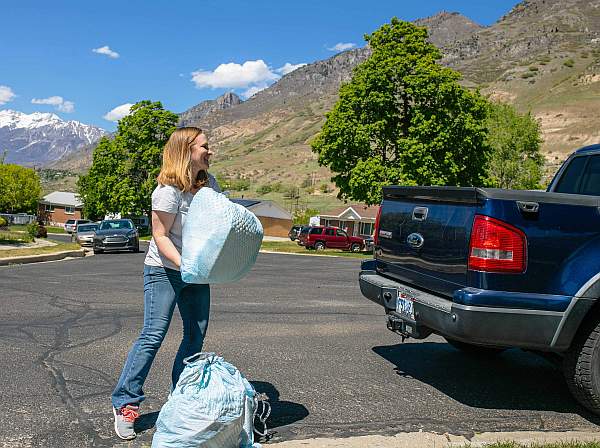 Regarding contamination, Recyclops’ use of transparent bags allows drivers to see the contents of the bag before picking it up. In contrast, most municipal recycling programs don’t even allow bags. “That's where we're kind of this anomaly,” said Smith. “We're saying bag all your stuff, as bagging allows us to avoid using garbage trucks. Eliminating trucks offers several advantages, from lower tailpipe emissions to reduced road damage.”

Another advantage of transparent bags is “it's less likely that your neighbor is going to put his wet, soggy grass clippings in your transparent recycling bags, but he might drop it in your recycling bin on the street when you’re not looking. We see that quite often,” says Smith.

Contamination is one of the biggest problems plaguing recycling. Most municipalities see between 19 and 40% contamination in their recycling loads. In contrast, Recyclops claims between 5 and 8% contamination using their bagged approach. Smith said another reason for low contamination rates is manual, instead of automated, pickups. “We don't get weird bulky items, like wheels, tires, whole radiators, and toilets when people call in for a pickup. Traditional recycling centers get weird stuff like that all the time that people jam into their bins. These create problems for recyclers, but we eliminate that probability by using bags... transparent bags make a big difference,” says Smith. Recyclops customers receive on average eight transparent bags per month for their recycling, which is usually enough.

Recyclops claims it is also reducing damage to residential streets. “Road damage is calculated by weight,” says Smith. “Instead of having one 100,000 lb. vehicle driving on a residential street, we have maybe ten or twelve 2,000 pound vehicles doing the same thing. We all know that 100,000 pound vehicle is going to do exponentially more damage to the street than the ten lighter-weight vehicles.”

The company also claims significant environmental advantages not only from recycling and reuse but from a CO2 emissions standpoint. “Our approach results in five to seven times less CO2 emissions per household,” says Smith. “By using smaller, more fuel-efficient vehicles we are not only creating more local work, but we have a smaller impact on the environment.”

Smith came up with the idea for Recyclops as an international relations major at BYU. A critical milestone of his entrepreneur journey was becoming a Crocker Innovation Fellow which included a $10,000 grant. “The Crocker Innovation Fellowship is the best-kept secret of BYU,” says Smith. “It's a yearlong interdisciplinary program for majors in mechanical engineering, industrial design, business, computer science, and electrical engineering, where you might have 20 students, combined with professors from different fields: computer science, business, hard sciences, law. Each team gets $10,000 to experiment and learn how to start a business. It's awesome. Tons of mentorship, and you have actual money to test out your idea.”

Smith leveraged several networks at BYU, including professors at the Business School. He became the president of the Entrepreneurship Club. Eventually, he reached his goal of getting admitted into the coveted Business Strategy Program in the BYU Marriott School of Business. “At BYU Business Strategy is a pretty difficult program to get into. My grades certainly did not justify it. But I tricked them into letting me in because I had already started a business,” muses Smith.

The original idea for Recyclops came to Smith not long after he moved into his first apartment in Provo and noticed it didn’t offer recycling. “I couldn’t believe it. I thought it was just my apartment complex, but after doing some digging, I found out that no Provo apartment complexes offered recycling. After more research, I realized it wasn’t just a Provo thing. This was a global thing.”

The fact that student apartments didn’t recycle was a wake-up call for Smith. He saw tens of thousands of students moving to Provo/Orem from single-family homes, many of which had recycling. They then move into apartment complexes that have none.

“I felt like this problem could be solved, did a ton of research into why it wasn't happening, and came up with a solution.” In 2014, Smith formed Recyclops, combining the words and concepts of “recycling” with “operations.” The company was funded primarily with student loans and student competitions. In 2019, Smith raised a $250,000 convertible note from University Venture Fund and the James Lee Sorensen Family. “That note really helped. I'd been doing the business for about five years. I kind of knew what I was doing and had stuff figured out.” Around the same time the company received a $100,000 TCIP grant from Utah Governor’s Office of Economic Development. “That grant was instrumental in our growth,” Smith said. “It allowed us to begin to expand the model into new markets and reach more customers.”

Over the past three years, the company has established operations in ten states. “In addition to bringing recycling to areas where it doesn’t currently exist, we’re also working to solve other sustainability challenges by partnering with various brands to co-design solutions,” says Smith. “These solutions are empowering their customers to contribute in big ways to the circular economy and build a more sustainable future. For instance, we just partnered with Imperfect Foods to introduce a Packaging Return Program that allows their customers to recycle the insulated liners and gel packs that are used to ship their perishable food items.”

Today the company has just over 10,000 subscribers, most of which are residential customers in ten states—a growing percentage of its customer base are in student apartment complexes, bringing the Smith full circle to the problem he set out to solve. “I’m glad to see that we are finally making a dent in the original problem that motivated me to start Recyclops in the first place.”