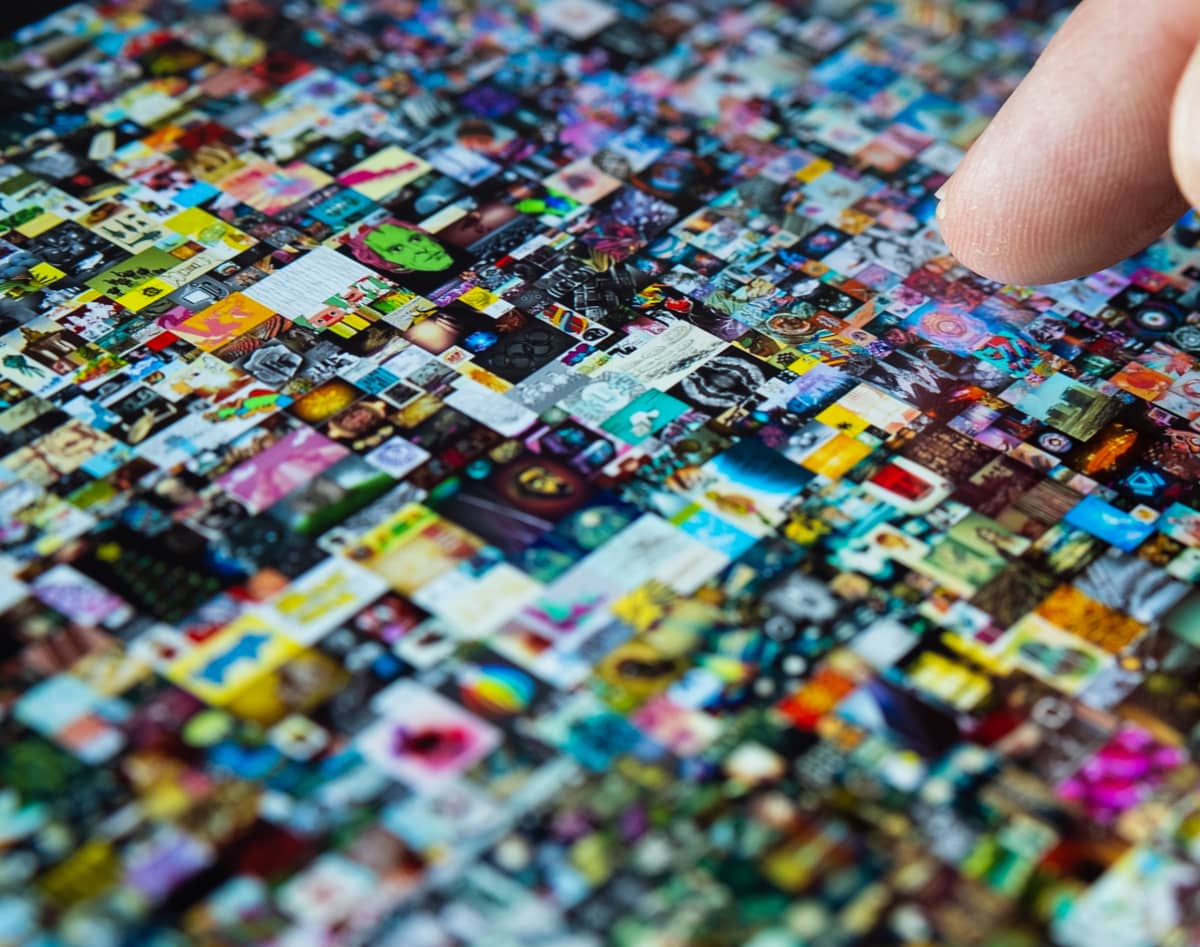 So What Happened With Hitpiece?

Last Tuesday, February 1st, a Provo startup saw an overwhelming flood of attention from the industry it hopes to serve. But despite the saying, it may turn out that not all press is good press.

In the case of NFT music startup Hitpiece, the attention may amount to a legal scandal.

Hitpiece is a Utah startup helmed by Rory Felton, a veteran of the music industry. Felton founded a record label called The Militia Group in 2000, later acquired by Sony 2012. Felton has also operated Feltone, an artist management group, since 2015.

Hitpiece launched in 2021 during the seemingly endless crescendo of NFT hype. The purported business was (relatively) straightforward; sell music as NFTs, or Non-Fungible Tokens. TechBuzz has previously covered Utah NFT startups, with a basic primer on the nascent field of NFTs. In short, NFTs represent self-custodied ownership of distinct digital assets. The exact mechanics are still under development, and even the basic ideas are still being worked out, but that hasn’t curbed enthusiasm in the space over the past year, with a flood of media attention, celebrity participation, and record investment.

The “NFT+Music” combo seems a natural fit, as the NFT flood overtakes all digital media. But Hitpiece is facing a severe backlash for one thing: They offered virtually every piece of recorded music as an NFT for sale… without asking any of the artists or I.P. holders for permission.

Beginning last Tuesday, musicians on Twitter began posting their outrage at discovering their entire body of work was listed for sale on Hitpiece as music NFTs. Brenna Ehrlich, musician and Chief Research Editor at Rolling Stone, tweeted at Hitpiece;

“Hi there, looks like your service plugs into a streaming service (Spotify?) and pulls in all available titles. Curious how exactly you're legally selling NFTs of artists' albums without their permission?”

The tweet was soon joined by hundreds of responses from angry musicians.

Indie rocker Ted Leo didn’t hold back, calling Hitpiece “bottom feeding scavengers of late capitalism sucking the last marrow from our bones.” Artist Left at London, who has 117,000 listeners on Spotify, said “I never have & never will sell NFT’s. & now some [expletive] are selling NFT’s of MY music?” Electronic musician Jeremy Blake tweeted, “Please remove these immediately. I did not mint these, I would never mint my work as an NFT, and this was done without my permission.”

The news quickly spilled across the Twitterverse and into major outlets like Mashable, Newsweek, Vulture, The New York Post, The Young Turks, Billboard, Loudwire, and of course, Rolling Stone.

Multiple sources confirmed that virtually the entire Spotify library was displayed on Hitpiece’s site, with each of millions of songs shown available for purchase as an NFT. Regardless of how obscure or mainstream the artist, whether the rights holder or artist was Disney or John Lennon, or an obscure indie one-man-band, every song was displayed, available for purchase. 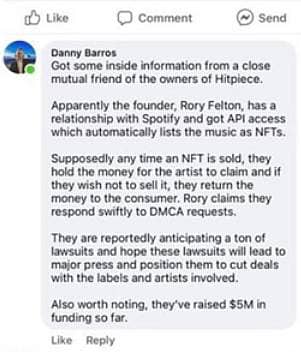 Twitter user The Human Fly, a “5-piece band making eclectic alt-folk," posted a thread of information on Hitpiece. The thread included a screenshot of a Facebook post claiming to have inside information on the Hitpiece strategy, though this couldn’t be confirmed at the time of press.

On February 1st, Hitpiece tweeted an image with the following text:

“Clearly we have struck a nerve and are very eager to create the ideal experience for music fans. To be clear, artists get paid when digital goods are sold on HitPiece. Like all beta products, we are continuing to listen to all user feedback and are committed to evolving the product to fit the needs of the artists, labels, and fans alike.

The Hitpiece site came down shortly thereafter, showing only the logo and a short message; “We Started The Conversation And We’re Listening.”

Social posts from Hitpiece on LinkedIn appear to have been deleted, but not before The Human Fly screenshotted relevant info. It appears Hitpiece held their launch party this year, with major artists like Busta Rhymes performing. Another screenshot in the same thread indicates Hitpiece raised $5 million, though that information couldn’t be independently verified.

“I am no longer working for @hitpiece.  To the artists, managers, labels, that I was working with to create partnerships I want to apologize for asking you to be involved. This was a poor choice by me and I gave more than I got and lost more than I gave.  More to be revealed…”

According to Billboard.com, on February 4th, The Recording Industry Association of America (RIAA), the trade group representing major record labels across the nation, sent a notice “on behalf of the major labels, alleging the infringement of their intellectual property rights and threatening litigation.”

TechBuzz has reached out to Blake Moderzitski and one other possible investor for comment.