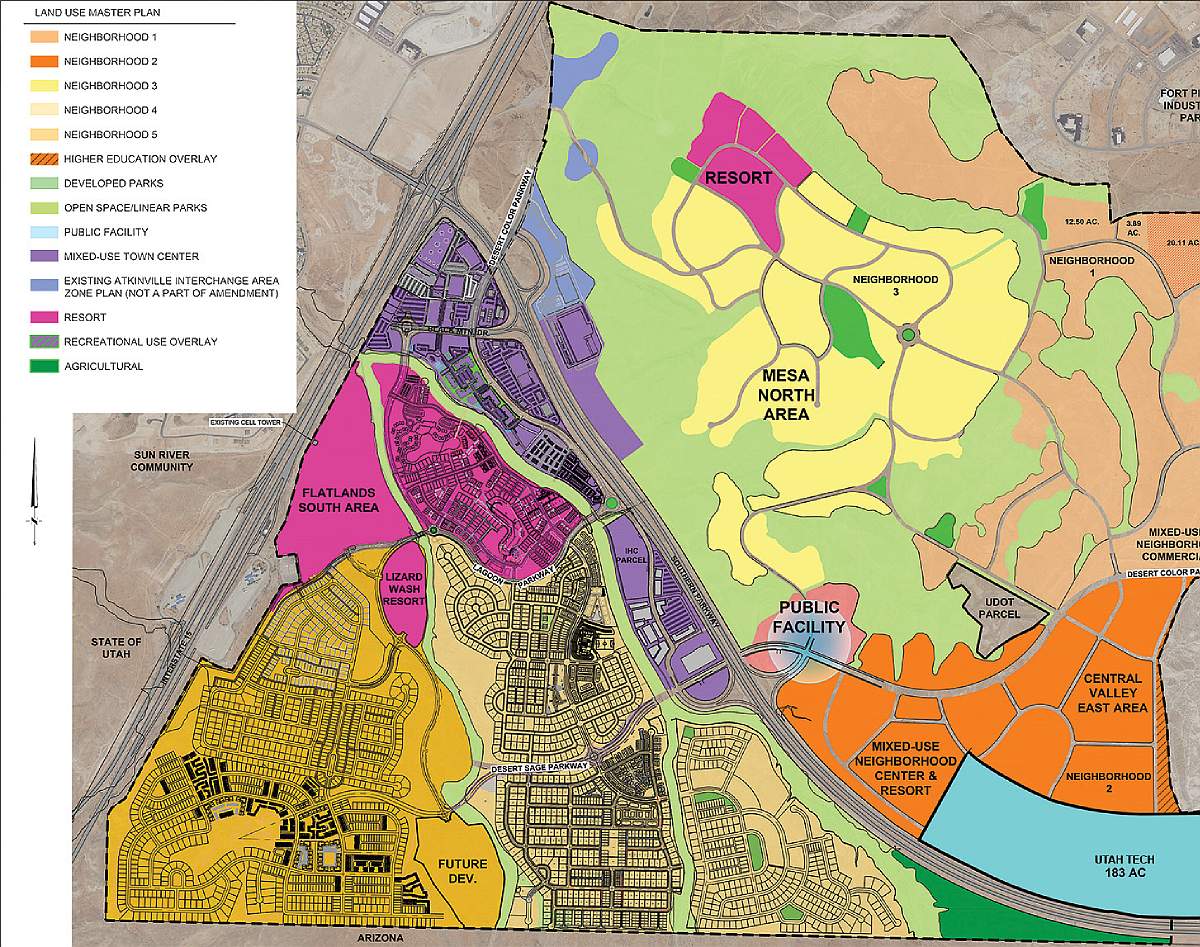 As industries across the nation changed gears from the effects of the Covid-19 pandemic, a dramatic shift led by public and private partnerships has been strategically simmering in St. George, one that will catapult southern Utah into a living, breathing, innovation machine—Utah Tech University’s (UT) visionary Innovation District on the Desert Color Campus. Is this Atwood Innovation Plaza on steroids? Not even close, think much bigger.

What’s an “innovation district?” The research brief, “The Rise of Innovation Districts: A New Geography of Innovation in America,” by Bruce Katz and Julie Wagner, discusses how in the previous 50 years, the landscape of innovation was dominated by places like Silicon Valley, suburban corridors with spatially isolated corporate campuses only accessible by car, with little emphasis on the quality of life or integrating work, housing, and recreation.

“A new complementary urban model is now emerging, giving rise to what we and others are calling ‘innovation districts.’ These districts, by our definition, are geographic areas where leading-edge anchor institutions and companies cluster and connect with start-ups, business incubators, and accelerators,” wrote the authors.

According to the brief, innovation districts are the manifestation of mega-trends that alter the location preferences of firms and people. In the process, these districts recognize the link between economy-shaping and social networking. “Our diverse population demands more and better choices of where to live, work, and play, fueling demand for more walkable neighborhoods where housing, jobs, and amenities intermix.” Let’s not forget how an “open innovation” economy rewards collaboration, something many Utah businesses sorely missed during the height of the global pandemic. 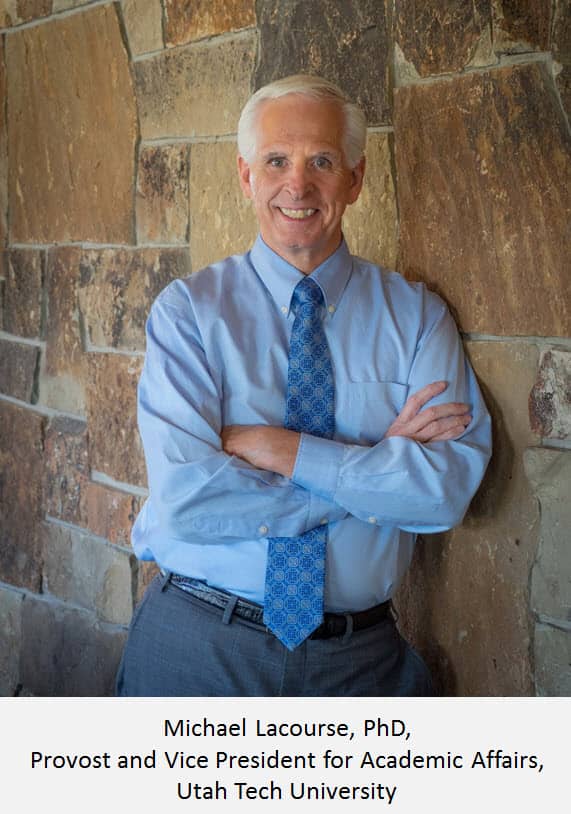 Michael Lacourse, PhD, Provost and Vice President for Academic Affairs at UT, describes Atwood Innovation Plaza at UT as a productive innovation ecosystem that’s been building for the last five or six years.

“We have about 200 patent applications that came out of the Plaza, dozens of businesses, and a host of other outcomes over six years, but we ran out of space,” says Lacourse. “The intent there was you start a business, maybe you’ve got three or four people, but once you get to that number, we don’t have space for you because it’s all small pod areas.”

With its convenient location and community connection, the Atwood Innovation Plaza will continue to function with a Makerspace, Business Resource Center, Incubator, and Accelerator. However, as stated earlier, the Atwood Innovation Plaza is running out of space due to high demand. To solve this,  UT purchased 183 acres of land for a second university campus located at the Desert Color master planned community on Exit 2, nine miles from UT’s main campus.

UT is creating a master plan for the 183 acres, and a major part of that plan is to build the Innovation District on a significant portion of the land. “Now for us, the District is a big step up from Innovation Plaza, which is 50,000 square feet. This could be a million square feet over time,” says Lacourse. 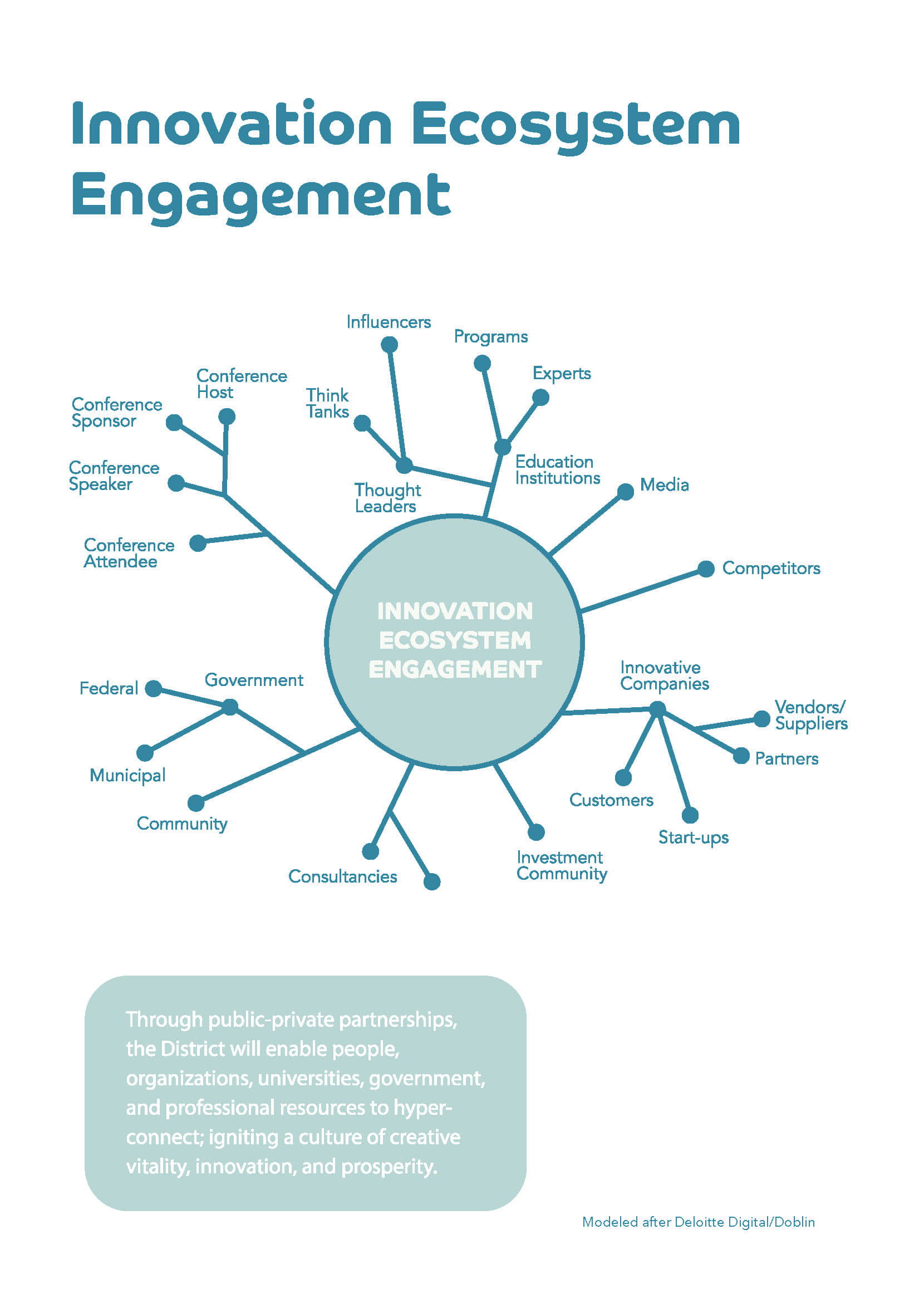 What is an innovation district?

Lacourse cites research from the Brookings Institution which argues that a research park and innovation district are not the same thing. Traditional research parks usually have buildings co-located, and possibly follow a theme, but with no social or physical connection between them.

“You have this traditional industrial/research park, an approach that’s born in urban, inner city areas, where initially they were repurposing spaces that were no longer old factories and shipyards and other spaces no longer in use. Folks came together and said, ‘How can we reuse this space in a way that contributes to the economy?’”

In contrast, the concept of an innovation district, as Lacourse explains, was created as an environment where people are put in close contact and actually bump into each other on a daily basis— “bumpability” as Lacourse calls it. The innovation district revitalizes the traditional research park because it puts people together rather than separating them.

Lacourse cites the example of a freelancer and a university employee in separate meetings occurring in the same building. “All kinds of things might happen to stimulate new ideas and opportunities as they bump into each other, strike up conversations, and learn from one another.”

Innovation districts on the rise in the US 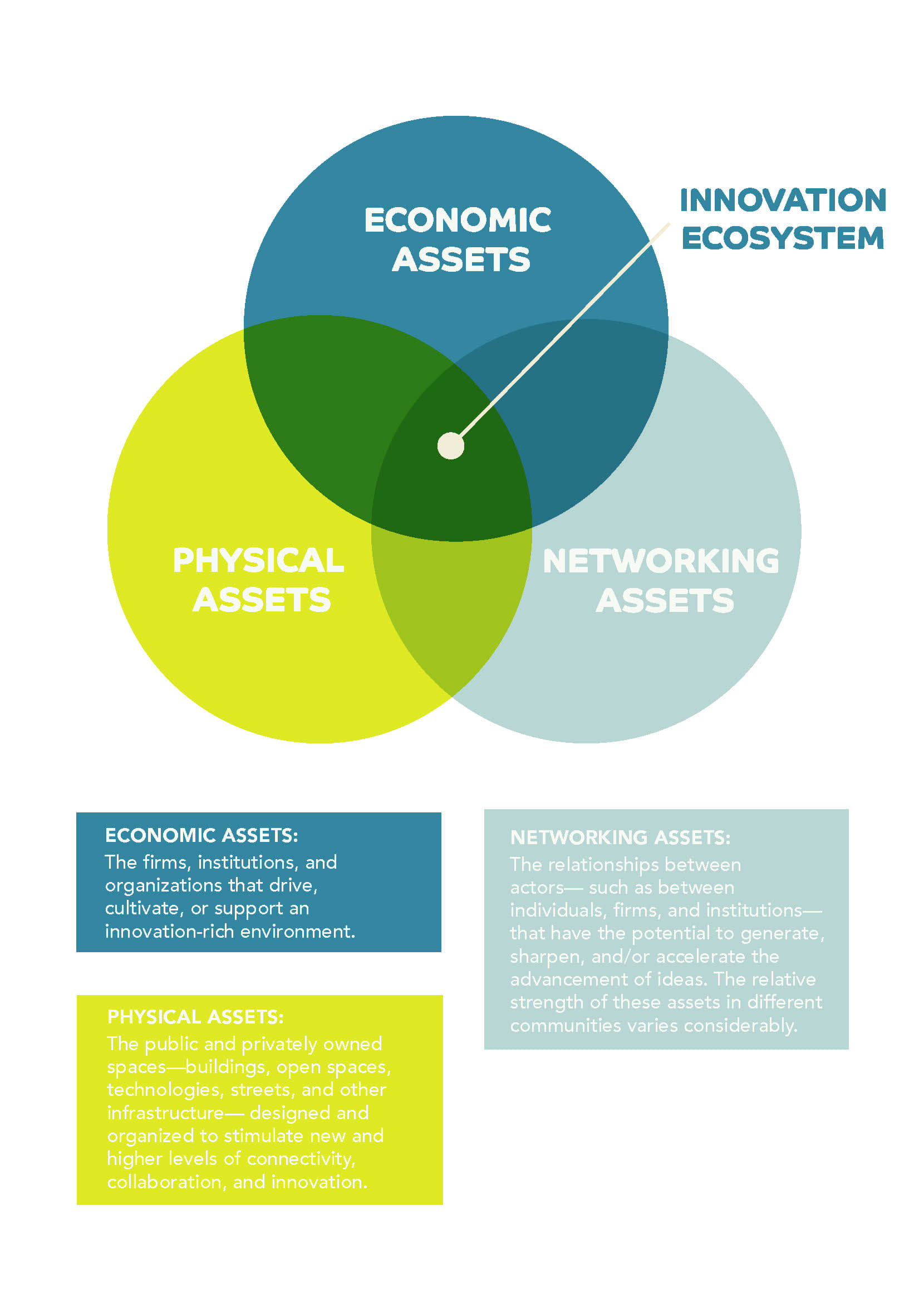 “We're going to build this from the ground up,” says Lacourse. “The idea is to bring together all of the different pieces that you would need—different services and support systems for people to go in and start creating, innovating, building new ideas and new products, and then have the resources to build businesses beyond three or four people, which is what we have right now.”

Where does a business go once they’re no longer three or four people, but not ready for Class A office space? The Innovation District fills that gap. An early startup housed at the Innovation District could continue to incubate, accelerate, and benefit from the energy, collaboration, and entrepreneurial ecosystem of the District.

Two critical aspects of UT’s approach to the Innovation District are applied learning and industry partnerships, giving students real world experience and preparation for the workforce.

Over the next 10-12 months, UT will identify public and private sector partners. As planning committees are established, conversations will focus on the District’s role in the master plan of UT. Ultimately, the District will incorporate strategic public and private partnerships that complement Atwood Innovation Plaza, St. George, and the growth of Tech Ridge to encourage collaboration, inspiration, and innovation. 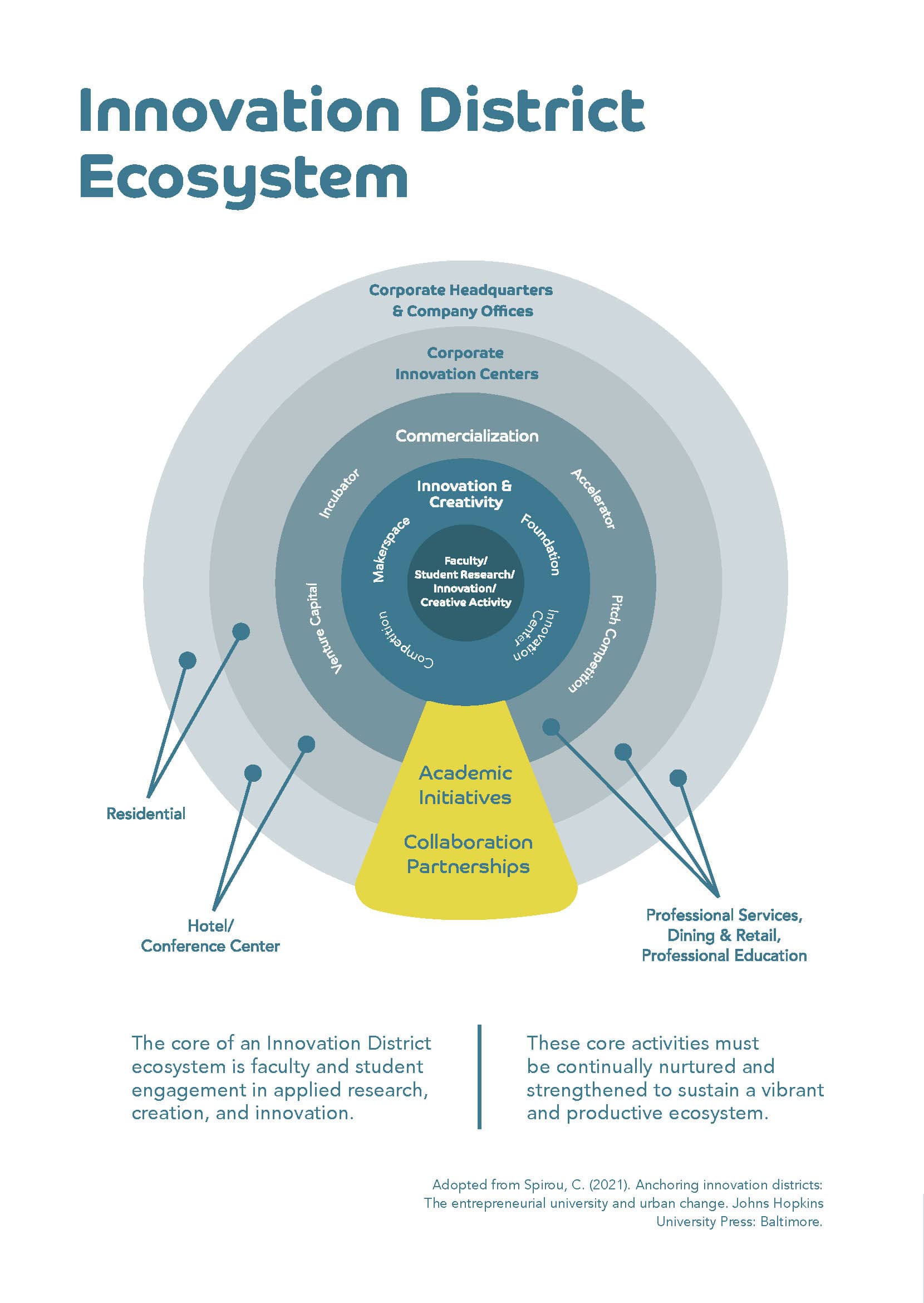 In less than a year, UT will enter the formal planning process. The university has put together  different committees to look at different aspects of the planning process. Next, they plan to hire a designer and/or architects to help design the space. UT could break ground on the Innovation District at the Desert Color campus as early as 2024.

“Companies are not going to stay where there isn't enough talent to run their businesses, so we need to be a different kind of university to support that, which is what we're trying to do with this polytechnic model,” says Lacourse. “St. George is a beautiful place to live, and I think more companies will want to stay here and grow because they’ll have access to the graduates of the university.”

“There is a broader trend in this country where the level of economic growth, including the growth of advanced sectors, is highly uneven,” explains Julie Wagner, president and founder of The Global Institute on Innovation Districts. “This can be measured quantitatively including the spatial concentration of VC and start-up investment occurring in just a handful of cities in the United States.

“Innovation districts are geographies of innovation that build on the R&D strengths of anchor institutions, such as St. George and Utah Tech. An emphasis on elevating the applied and translational strengths of such institutions can be a magnet of companies and firms seeking to obtain new knowledge and insight.

“This is the core of an innovation district proposition and one that St. George can build from. Like in all cases, St. George will need to undertake an empirical analysis to discern their particularly magnetic and commercially-relevant strengths and how to deploy those strengths that develop a larger, more inclusive place where a diversity of firms, and citizens can play a growing role,” says Wagner.

The Innovation District at UT’s Desert Color campus would be governed through UT’s Innovation Foundation and/or its affiliated entities with a goal of producing $100-$200 million in annual economic activity by 2030, meanwhile supporting enriching educational experiences for over 2,000 undergraduate and graduate students annually.