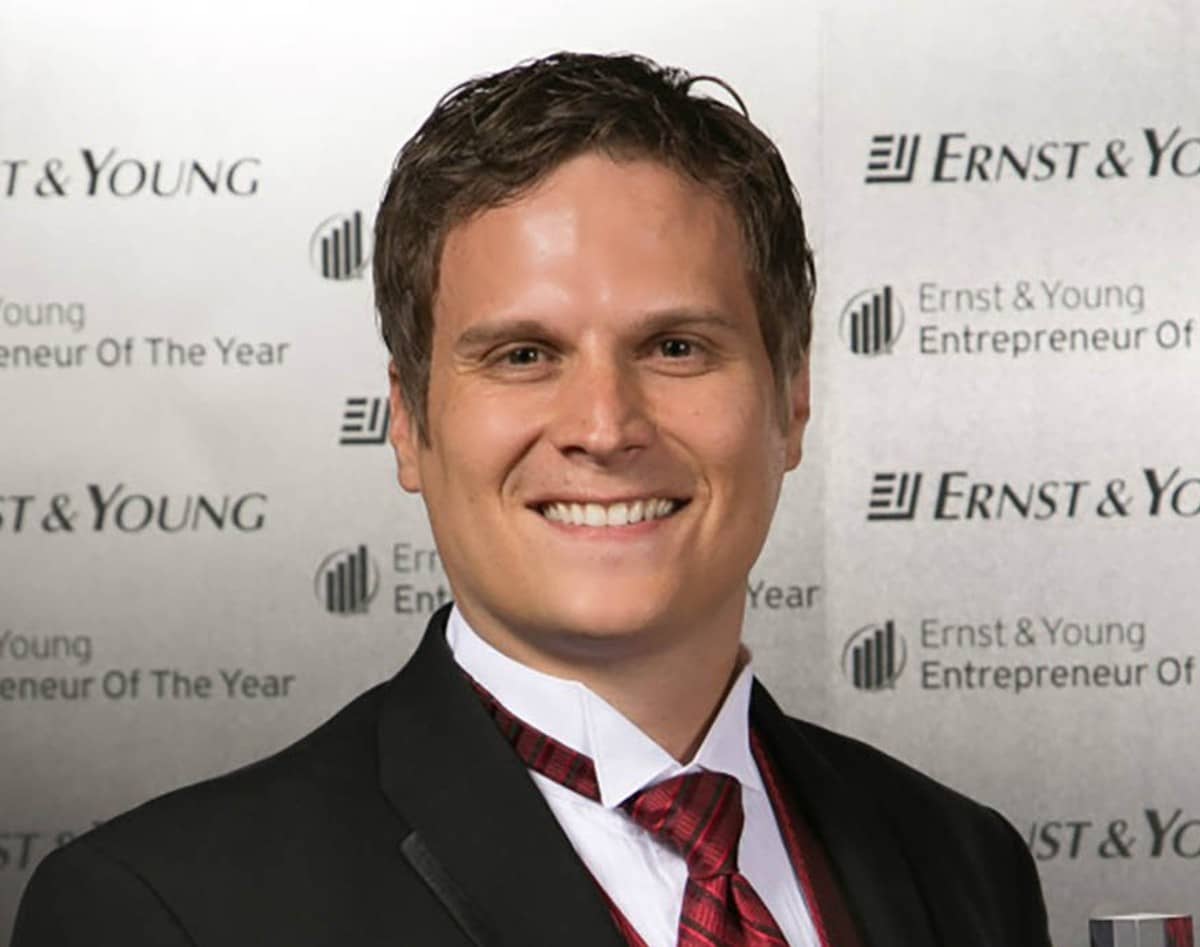 By now, most of the Utah tech community (and many working in national media) have seen the comments made by Utah businessman and Republican political activist Dave Bateman, founder and former CEO of Entrata. 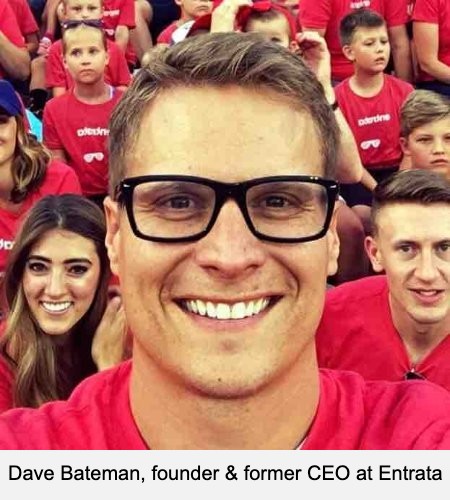 On January 4th, Ben Winslow of Fox 13 broke the story of Bateman’s email to some of Utah’s most successful, prominent, and influential leaders in tech, business, and politics.

In that email, Batemen outlined his theories that the COVID-19 pandemic and efforts to widely vaccinate were part of a plot by “the Jews” to wipe out the global population and institute totalitarian rule. The email also indicated that Pope Francis was a sleeper agent for said conspiracy.

Several of the recipients of Bateman’s email moved quickly to publicly denounce its contents, and Entrata made a statement through CEO Adam Edmunds’ Twitter account. 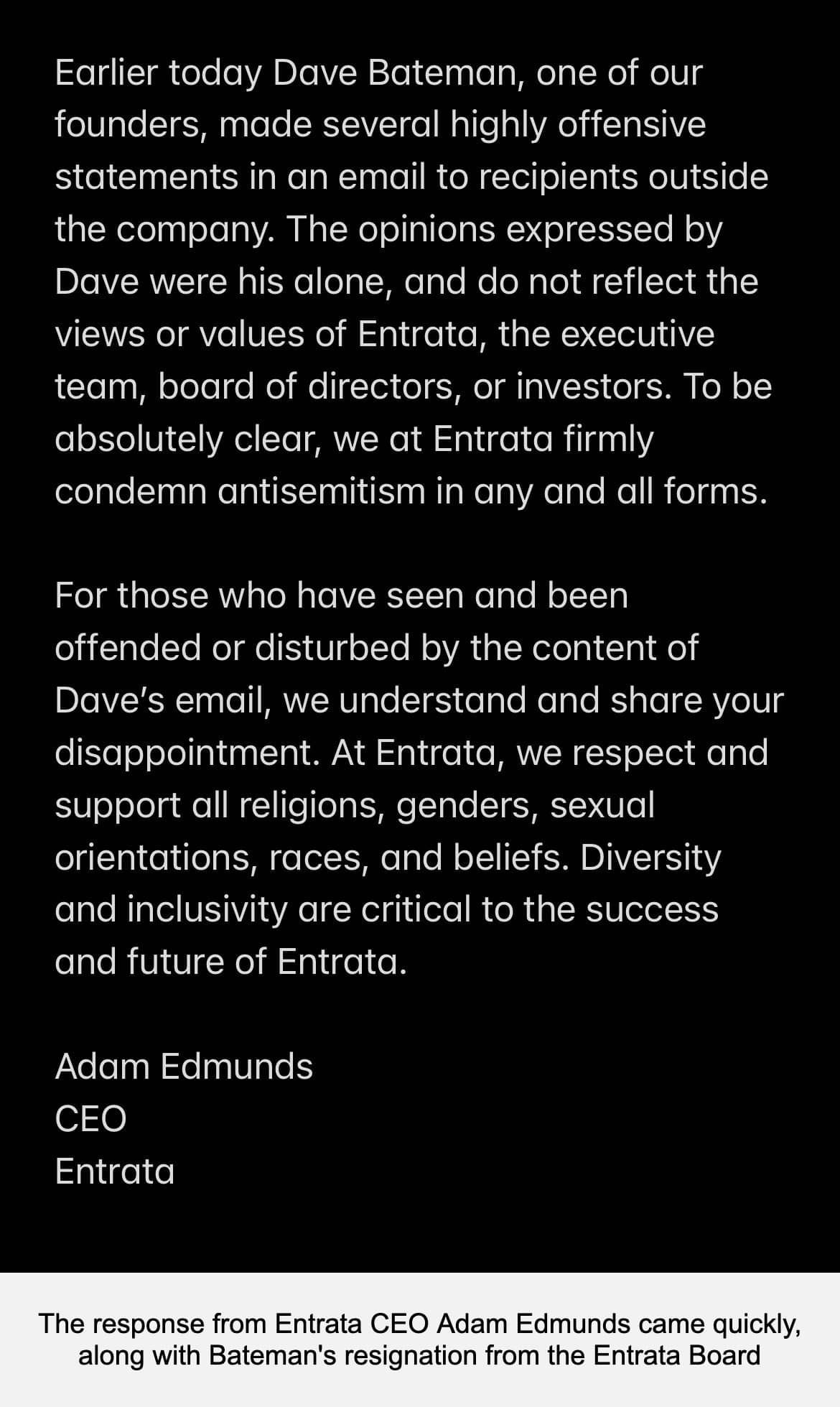 "Earlier today Dave Bateman, one of our founders, made several highly offensive statements in an email to recipients outside the company. The opinions expressed by Dave were his alone, and do not reflect the views or values of Entrata, the executive team, board of directors, or investors. To be absolutely clear, we at Entrata firmly condemn antisemitism in any and all forms.

For those who have seen and been offended or disturbed by the content of Dave's email, we understand and share your disappointment. At Entrata, we respect and support all religions, genders, sexual orientations, races, and beliefs. Diversity and inclusivity are critical to the success and future of Entrata.

Later that day, Edmunds announced that Bateman had been asked to resign from the Entrata board, which he did.

Bateman was the CEO of Entrata from founding in 2003 until July 2021, when Entrata announced a $507 million Series A investment round.

The same day the news broke of Bateman’s email, he echoed the conspiracy theory in a post on his facebook page (Bateman's profile is no longer publicly available):

From Bateman's post: “Did you know the 1924 Immigration Act allows the US government to legally sterilize you without your knowledge or consent, so they can control inferior populations. Hitler applauded the Act’s passage. 25% of Native American women were forcefully sterilized by the US government by 1976. You could be next.”

Other posts from Bateman that were public on the morning of January 5th indicate he took residence in Puerto Rico at the beginning of 2021. Some in the Utah tech community are now calling on him to leave the state permanently.

Blake McClary, President of the Silicon Slopes chapter in Salt Lake City, said on Twitter: "Dave Bateman has been the worst representative of Utah tech for years. We all know this. It's time for him to step down from Entrata and enjoy his tax haven in Puerto Rico and not embarrass us."

McClary and Roberts were far from the only ones to respond publicly condemning Bateman’s anti-Semitism. Following is an inexhaustive list of public responses from Utah and national leaders:

Brad Wilson, Speaker of the Utah House of Representatives: "I’m deeply disturbed by these hurtful comments. This is simply unacceptable and inexcusable."

Ryan Smith, Cofounder of Qualtrics and owner of the Utah Jazz: "That email crossed lines that should never be crossed. There is no room for discrimination of any kind, anywhere, ever."

Clint Betts, President of Silicon Slopes: "Dave’s email was insane, intolerant, and anti-semitic. It is not representative of Silicon Slopes or the inclusive community so many in this state are trying to build."

Owen Fuller, CEO of LucidPress: "It's frustrating and sad when a person in a community you love says something so wrong, dangerous, anti-Semitic, and hurtful. It's encouraging that so many leaders have quickly and unequivocally rejected those comments. I do too."

Meg Morley Walter, previously of Silicon Slopes, The Beehive, currently Dir. of Comms for Becky Edwards for U.S. Senate: "This is absolutely disgusting and I’m so frustrated for my friends in tech who are working to make our state - more welcoming place."

Zach Holmquist, Co-founder of Teem, acquired by WeWork in 2019 — of Bateman's resignation from the Board of Entrata: "It’s unclear why this didn’t happen long ago when the larger community realized he was highly problematic. Utah’s tech scene is so much better, kinder, and more accepting than this, and I am so proud to be a part of it. ❤️🐝"

Roy Banks, CEO of Weave: “I’ve been a part of the Utah tech scene for over 25 years. Stories like these, where a subset of our community are targeted and where ignorance and prejudice underlie someone’s deeply held and misguided beliefs, are much too common. I’m one of a small percentage of black executives here in Utah, and have faced similar ignorance and prejudice. My heart truly hurts for the Jewish community here in Utah, and beyond our state.”

A statement from The Salt Lake Chamber: "The Salt Lake Chamber understands the destructive nature of conspiracy theories coupled with bigotry in all its forms. We recognize, as do you, that inflammatory statements by one person do not represent the Utah business community or the values of our civic community. However, such statements are hurtful and dangerous, and they require individuals and organizations of goodwill to respond."

The news brought national attention from Noah Shachtman, Editor in Chief at Rolling Stone; Matthew Yglesias, Founder of Vox; Charles Ornstein, managing editor at ProPublica; and thousands more. The original Tweet from Ben Wilson of Fox 13 has at this writing over a thousand retweets and over a thousand more quote tweets.

The professional press from journalistic outlets across the nation have been particularly vocal in responding.

Bateman founded Entrata in 2003. He’s also been a vocal activist in the Utah Republican Party, donating large sums. As Entrata continued to grow through the past decade, Bateman's now inaccessible Facebook posts indicate he became increasingly interested in topics esoteric, controversial, and now to the blatantly offensive. Some of the highlights and headlines of his public life are listed below:

2013: Bateman was the Ernst & Young Entrepreneur of the Year
2015: Bateman named CEO of the Year Honoree by Utah Business
2017: Entrata opens new headquarters in Lehi
2018: Bateman becomes Utah’s single largest individual contributor to the Utah Republican Party
2019: Bateman makes sexist remarks from the main stage at the Silicon Slopes Summit
2020: Bateman sued by Trevor Milton, founder of Nikola Motors for defamation
2021: Batemen transitions from CEO to Board Chairman at Entrata following the $507 million Series A, the largest in Utah history
2022: Bateman sends unhinged email to Utah business and political leaders