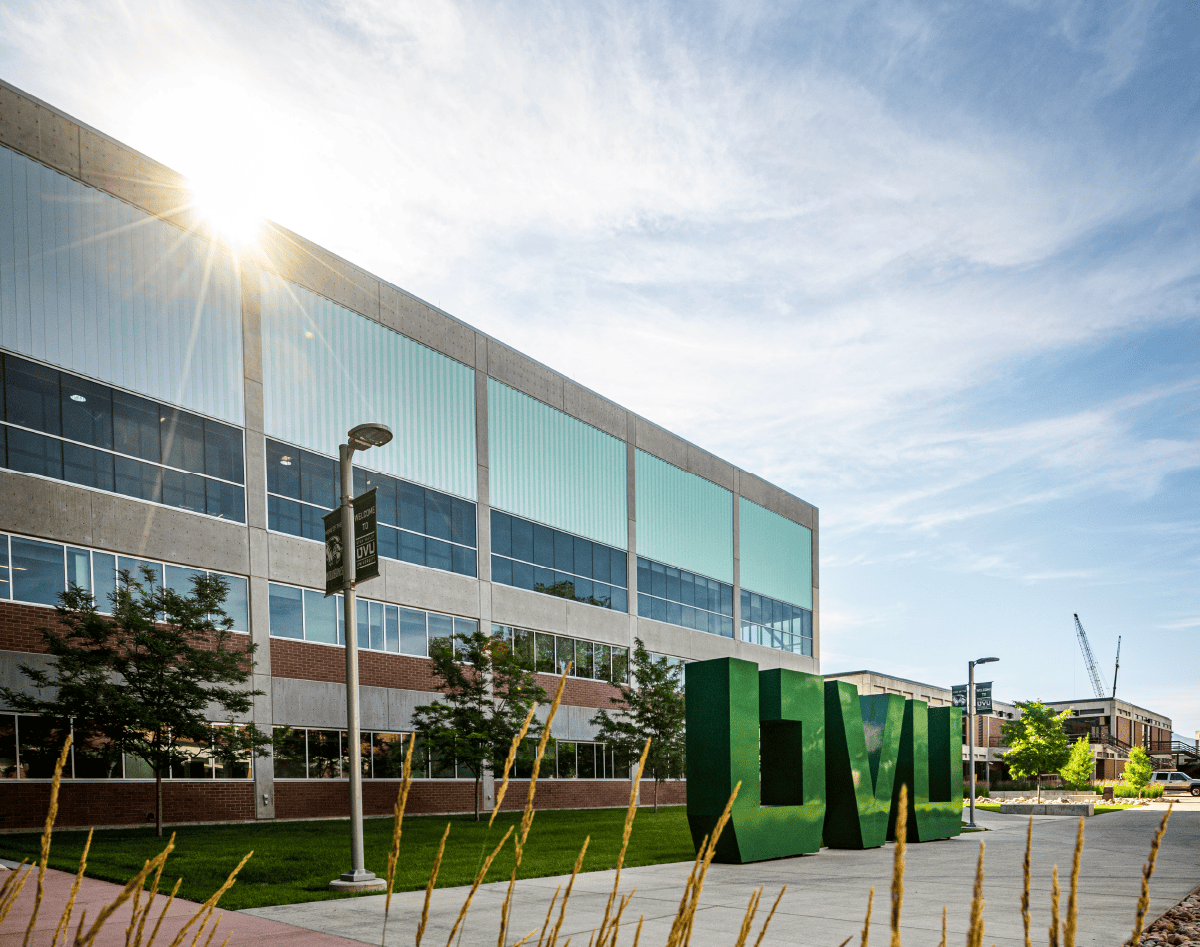 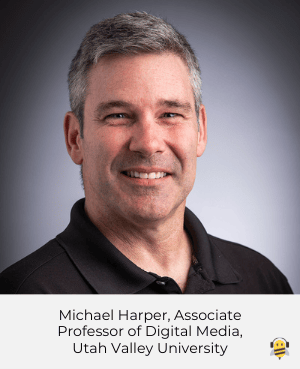 Michael Harper is an associate professor in digital media at Utah Valley University (UVU). In a recent discussion about UVU’s Extended Reality & Simulations track and the future degree the university is working on (projected to be finalized by the fall of 2024), he says, “I’ll go out on a limb here...in 20 years, even 10, if you’re a company and you have not fully embraced some form of augmentation and mixed reality—if you haven’t done that, you’ll be out of business.”

Those were powerful words, but technology is moving fast and a lot can happen in 20 years. Looking to the future, extended reality will transform the way we do business, and UVU is taking strategic steps to get ahead of this trend and prepare students and Silicon Slopes for the developments headed our way.

What is extended reality or XR?

VR is a 3D environment generated by computer technology where a user can be fully immersed in a virtual or simulated world through the use of VR headsets, haptic touch, and sometimes even environmental feedback.

AR overlays digital imagery onto the real world. A user can utilize a device such as an iPhone or iPad to overlay immersive imagery, and even use spatial sound, within the real environment. Examples of AR technology include Snapchat lenses and Instagram filters for painting faces in real time or Apple’s exclusive AppleTV series “For All Mankind” that integrates AR objects directly into the mobile TV App by placing media on a table or a floor to engage participants in immersive content.

Then there’s MR, which Microsoft called the next wave in computing. “Mixed reality is going mainstream for consumers and businesses. It liberates us from screen-bound experiences by offering instinctual interactions with data in our living spaces and with our friends,” states Microsoft. “Mixed reality is a blend of physical and digital worlds, unlocking natural and intuitive 3D human, computer, and environmental interactions. This new reality is based on advancements in computer vision, graphical processing, display technologies, input systems, and cloud computing.”

This experience requires a vastly different headset than a Meta Quest 2 headset most consumers are used to in today’s market. This is rapidly changing, though, and we’ll see major advancements in technology as headsets transform into daily use items. That said, almost all XR experiences will evolve to the MR space within the next two decades.

“There is no business on this planet that can’t make use of extended reality technologies," says Harper.

The Digital Media Department at UVU currently has four degrees: Animation & Game Development, Digital Audio Production, Digital Cinema Production, and Web Design & Development, and now building the new bachelor’s degree as the Extended Reality & Simulations track, which is currently the foundation for what is hoped to be the fifth official degree for the unique program, Extended Reality. 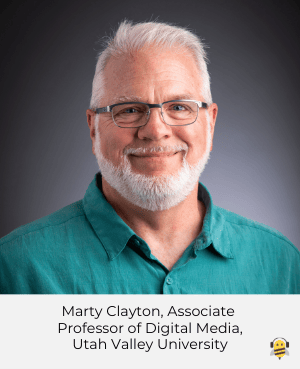 This process is nothing new to Professor Harper and his colleague, Marty Clayton at UVU, who have developed cutting-edge curriculum and engaged in reality-based projects for many years. In fact, each will bring their experiences to create this new program to represent a one-of-a-kind program within academia, as well as industry. Their combined experiences bring elements of game design, interaction design, gamification and simulations, spatial audio, and unique real-world applications of XR-based technology through hands-on projects, internal, as well as external partners, with major industry leaders.

The push to understand VR started back in 2004/2005 doing virtual reality photography using Apple’s older QuickTime Virtual Studio. The pair gradually built up capacity as technology continued to advance, now including all the current headsets we see in the market today, explains Harper.

Clayton and Harper have been thinking of doing a degree program for XR for years, but until recently, there wasn’t large public access to these technologies in any significant way. The technologies existed, but were in their infancy and hardware was expensive. It wasn’t the right timing to launch an entire degree, but in 2019, the professors agreed they needed to start planning the eventual degree, and by fall 2021 (Covid set the timeline back) they had developed a basic framework to build a new track. This track temporarily nestles within the Animation & Game Development degree to provide a sustainable foundation until the official degree has been certified.

Harper and Clayton have developed the framework over the last eight months to get the track formalized internally, and will be submitting the official request early this fall. They will push hard to get approval from the Dean of the College of Engineering & Technology, Kelly Flanagan, all the way up to the Board of Regents, so the program can keep pace with industry needs to grow Utah businesses. What’s more, the Digital Media Department at UVU will launch the new track this coming fall semester with several core classes that will propel the track forward as students begin to gravitate to the program. 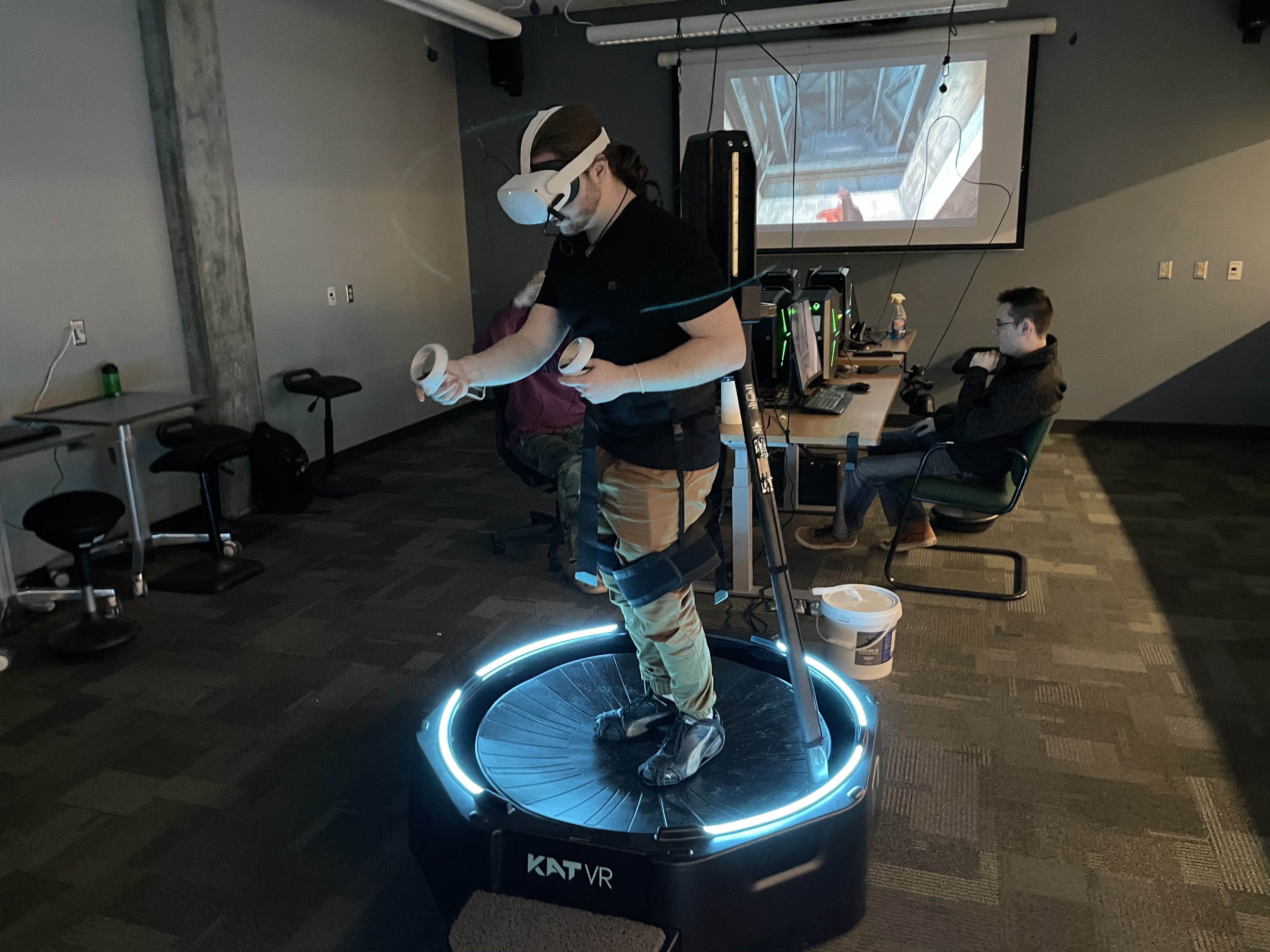 Ken Brueck founded a VR company in Utah. Harper was his professor while he studied in the Digital Media Program at UVU. Brueck graduated in 2007 and they kept in touch. “In 2016, I founded a company called Modus VR that provides a suite of tools for designing audio visual (AV) spaces," says Brueck. "Since then, I've owned and used nearly every consumer-grade VR headset available. I'm simultaneously VR's greatest skeptic and advocate!”

Brueck says there's a large and growing need for UVU’s forthcoming extended reality degree. Even though XR is still in the midst of the hype cycle, these technologies are here to stay and will impact many industries moving forward. Currently, new employees rarely have any meaningful exposure to XR, which means they have a long road of learning on the job before they're fully productive, he says.

“Imagine hiring an app developer that's never used a smartphone before," says Brueck."A degree in XR gives those students a massive head start. They can understand the strengths and weaknesses of the technology, the dos and don'ts, and what's a gimmick versus what's valuable instead of having to learn those things on the job. They'll be in a position to contribute to the team much faster. They'll be far ahead of their peers.”

Kevin Webb was a student at UVU in the Animation and Game Development program from 2011 to 2017. Upon graduating, Webb landed a UX software prototyping and development position at Trideum Corporation, utilizing the skills he learned during his studies for a variety of DoD and commercial solutions. Additionally, he has worked on numerous projects on a contractual basis for a variety of clients producing interactive content media for a variety of use-cases varying from educational games, to training simulators, to straight-up entertainment products.

“Every contract I have worked on, consulted for, or otherwise been involved with for the last three years has had some form of XR component to it," explains Webb. "Being cross-disciplined between art, design, and implementation put me at a great advantage to create solutions for these use cases and made me very valuable as a professional. I recently began teaching adjunct at UVU within the Digital Media Program and am looking forward to continuing sharing my enthusiasm for this discipline and craft with the students at the university.”

Webb says it’s great to see UVU being so responsive to emergent technology in an incredibly rapidly changing industry. For a good while, the technology was almost there, but still left a lot to be desired and the XR hardware we have now compared to four to eight years ago is staggering at the difference in quality and performance. 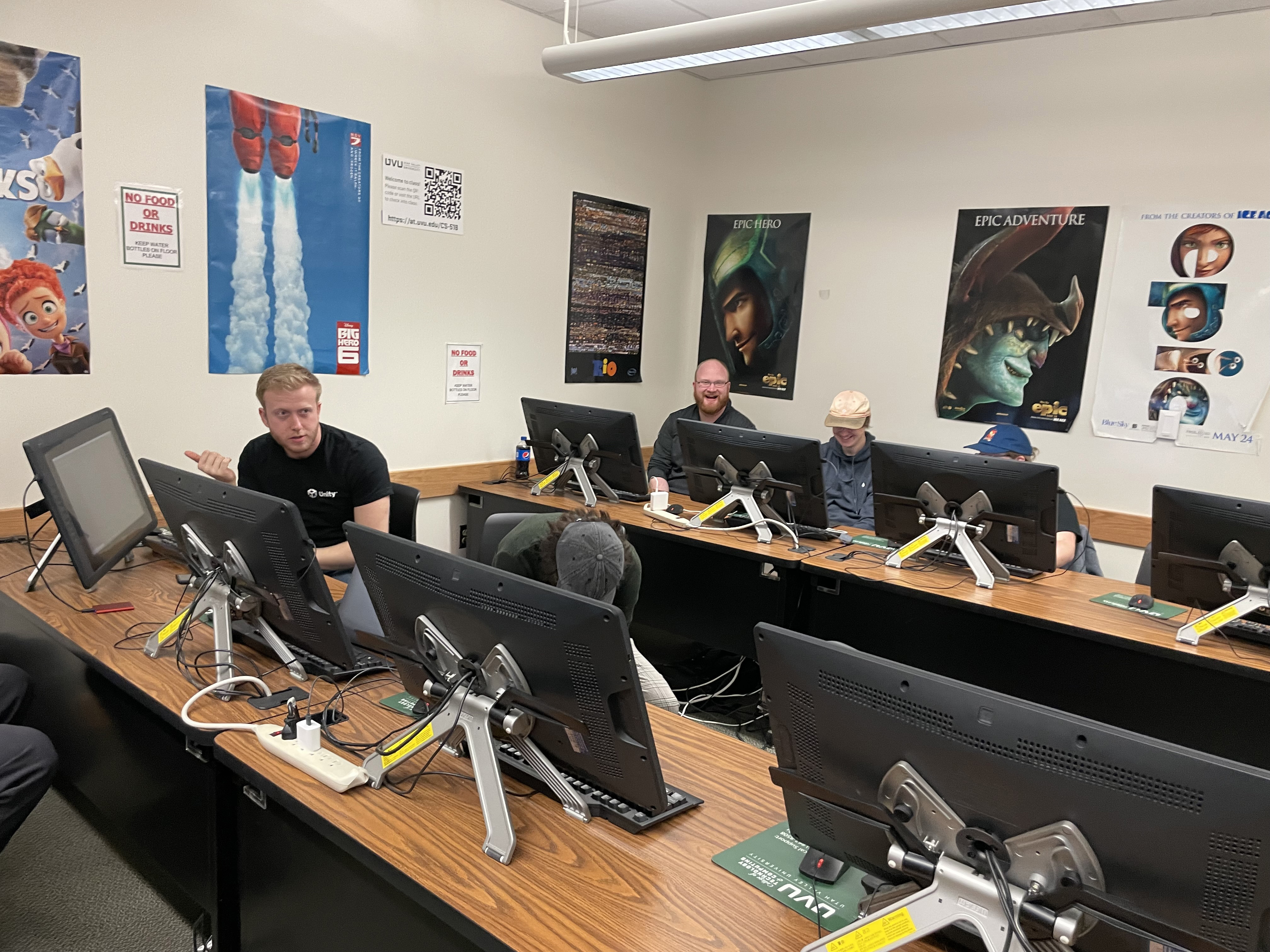 As far as UVU is concerned, Webb says introducing the track at this juncture allows students to get valuable experience with technology they will see in the future. They will also grow with the technology as it adapts and evolves and to be part of the driving force, which dictates its evolution.

Don’t get left behind

"The tools and technology we use now are vastly different from the ones 5-10 years ago," says Webb, who anticipates that XR in general will be the same. "It's just how technology is, and you have to go with the flow or get left behind." In his professional opinion, there's a lot of players who are excited about this technology.

“I won't say any names, but XR's increasing appearance in social media services, its rate of adoption among the entertainment industry, and the sheer number of clients who are asking me to come up with their wild XR solution is indicative of a pretty interesting phenomenon.

“A lot of big and small names feel the pressure of this technology on the horizon and there are a lot of resources being pumped into it, so that they are one the ones who find ‘the solution’ and bring it to the mainstream. UVU is at a great advantage, they will be the ones producing the graduates who will make the decision on who wins this battle. So, please if you pursue this program, use your power for good!”

What about this expensive equipment? The Digital Media Department at UVU works with many different organizations and accepts donations from individuals, businesses such as Trideum and META, as well as foundations like the Rocky Mountain Power Foundation and the Wheatley Foundation. Such donations have helped the Department build its lab spaces  and purchase headsets such as the expensive HaloLenses. These donations have come at a pivotal time because the Department is limited on funds, and they are extremely helpful in moving this new vision forward in a comprehensive way. If you or your company is interested in donating, feel free to contact Professor Harper at UVU to learn more. 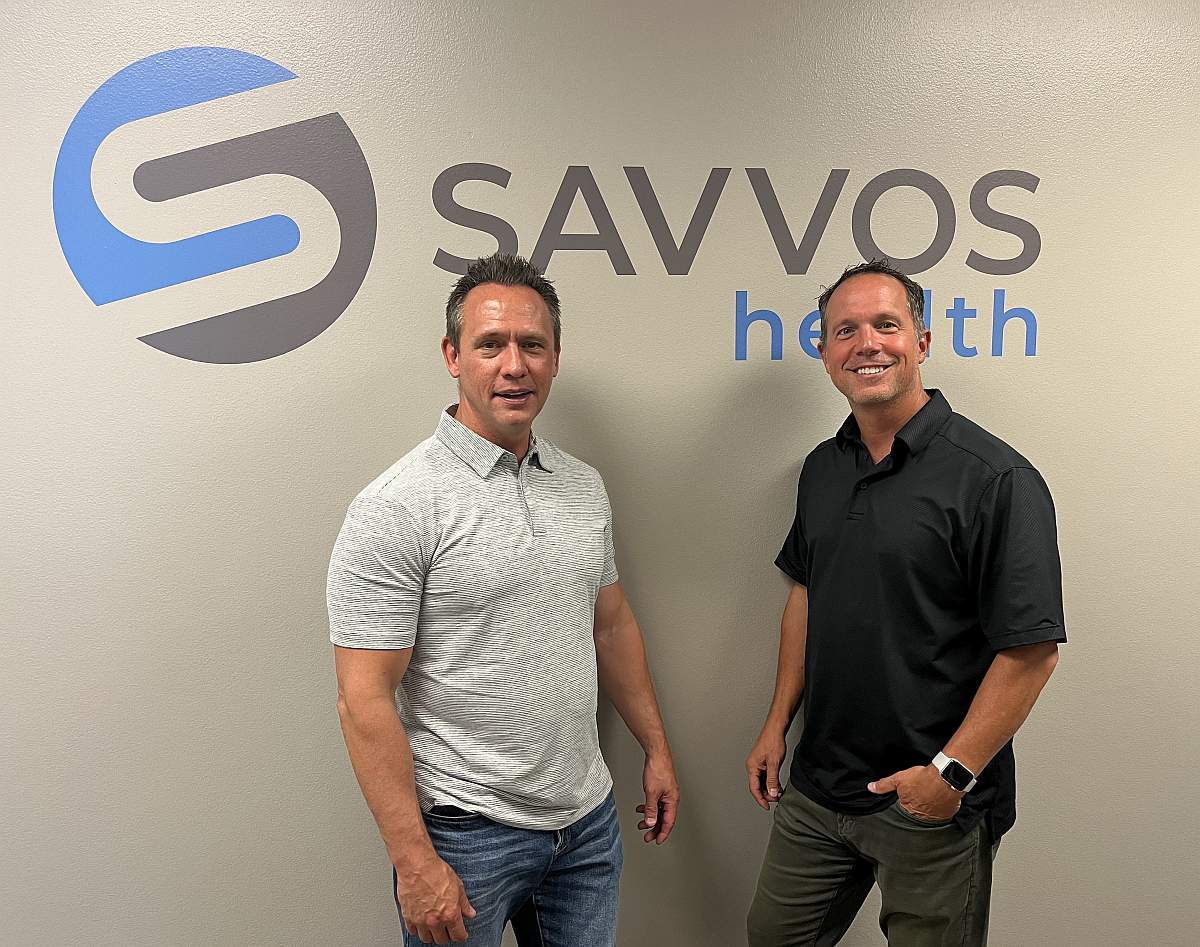 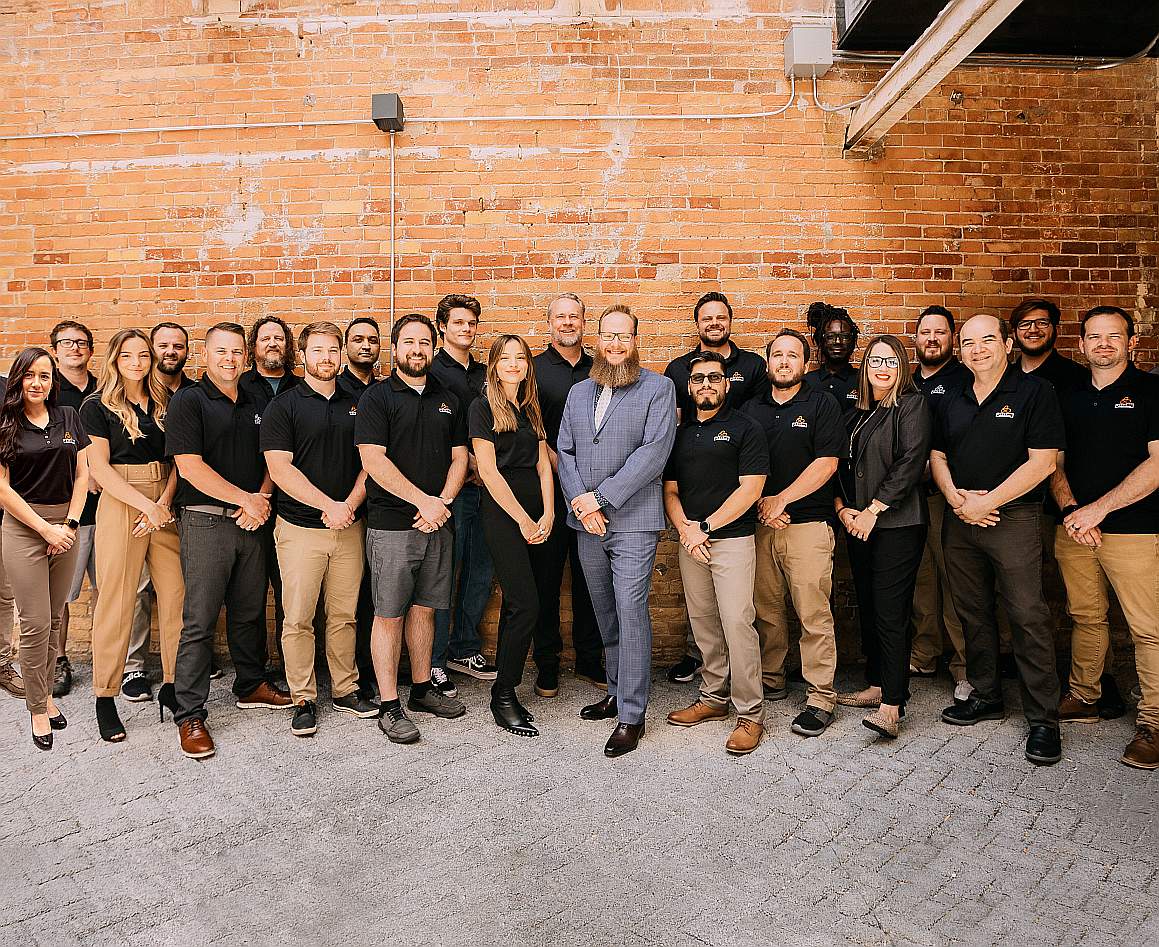 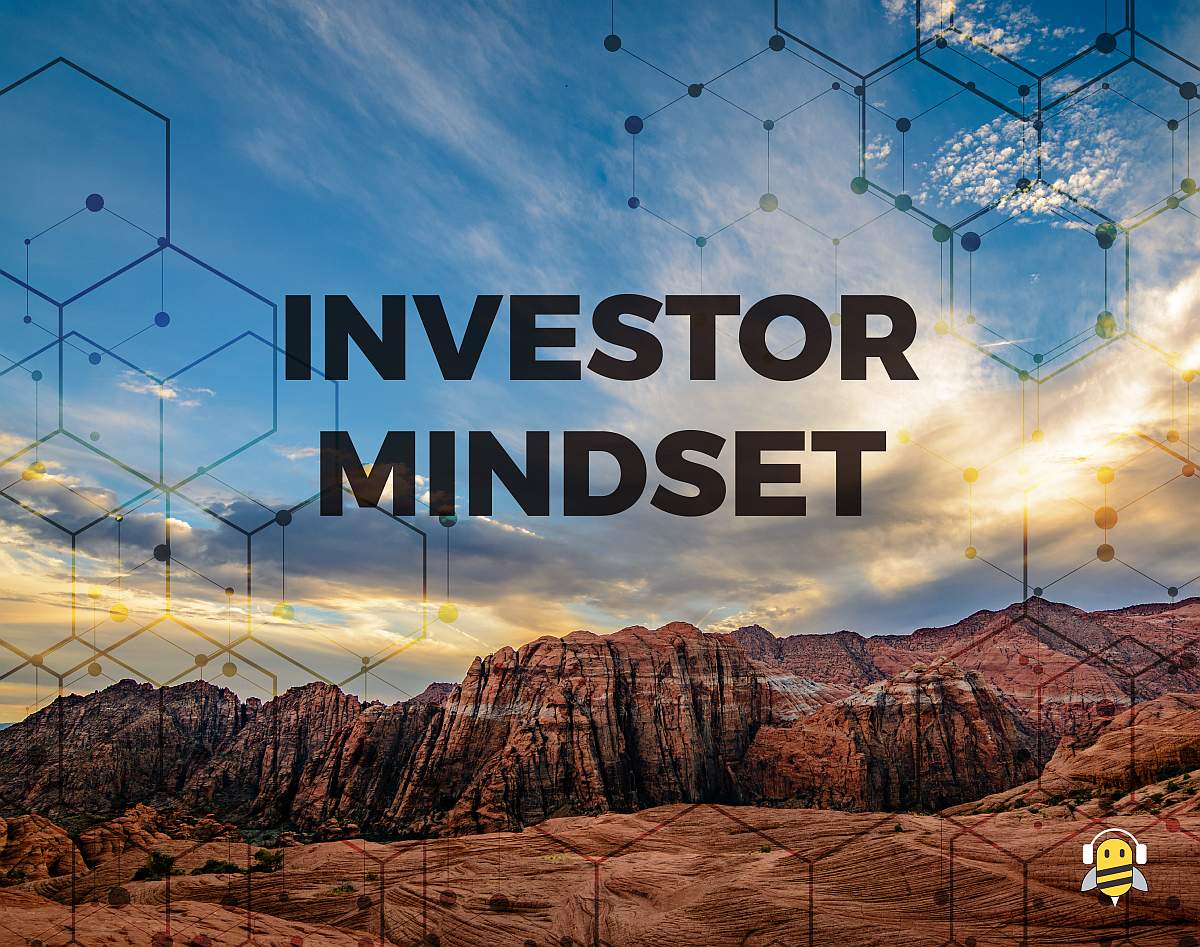