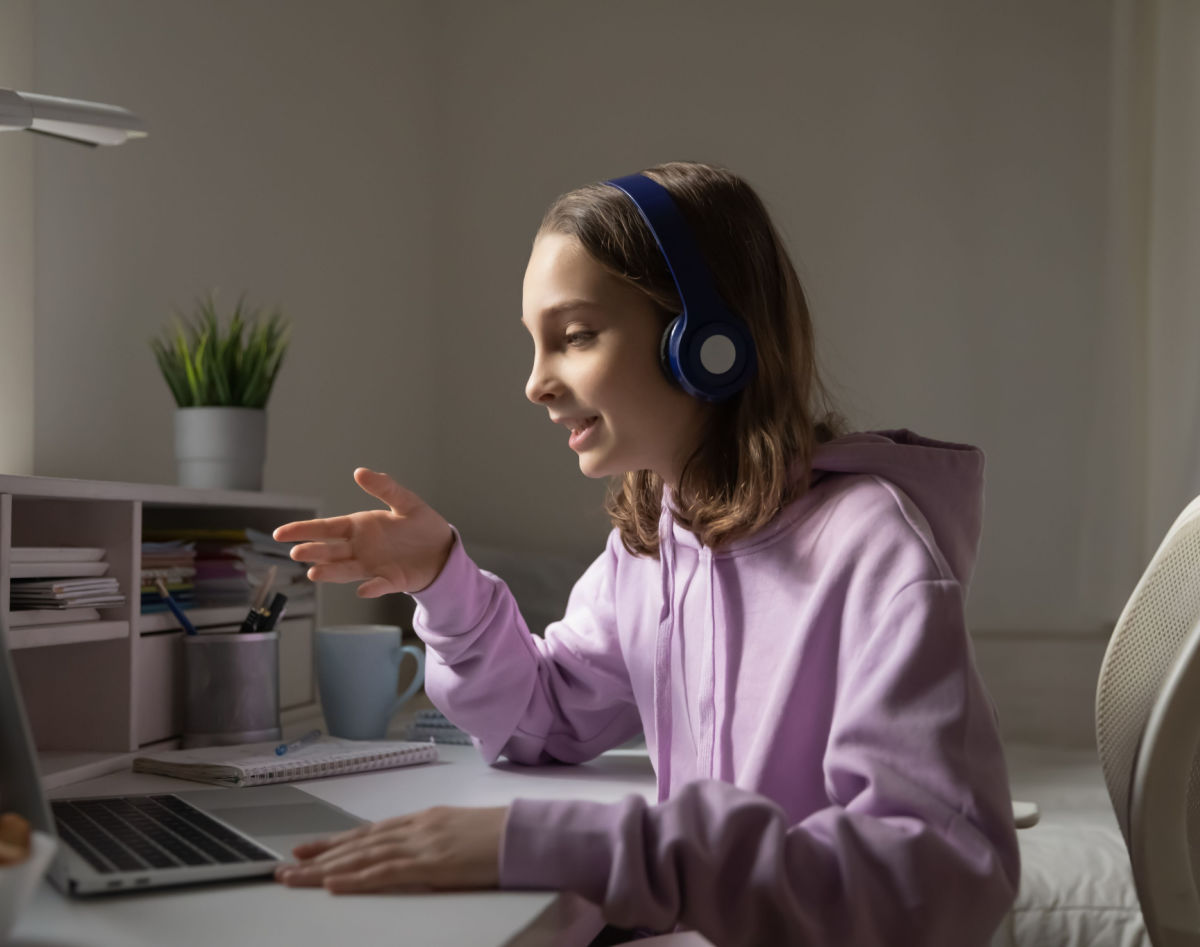 Stutor, a Lehi, Utah-based 24/7 tutoring marketplace, is launching its app for students initially at Brigham Young University and Utah Valley University in November.

College students can use the app to find on-campus student tutors who have passed the specific class they’re studying for. And students can connect with these tutors at any time, even if they’re cramming for a test at 1:00 a.m.

“So if a student says, ‘Hey, I need help today with Finance 201 from Professor Larson from 8:00 to 9:00 p.m.’ It pings and notifies every single tutor eligible to teach that class, so it's kind of an instantaneous help model,” Stutor cofounder C.J. Lee told TechBuzz.

Students who want to tutor go into the app, list the classes they’ve taken and passed, and submit the list for verification. Once Stutor verifies the list with the university, that person can become a tutor and make money helping teach things they already know.

The idea for Stutor came to Lee because of his time as a student athlete. He was recruited for BYU’s golf team right out of high school. But like many student athletes, he was always missing school to compete. He recalls being gone anywhere from 12 to 14 weekends throughout the school year and found himself struggling to keep up.

“I felt like, why should I be penalized for playing my sport?” he said. 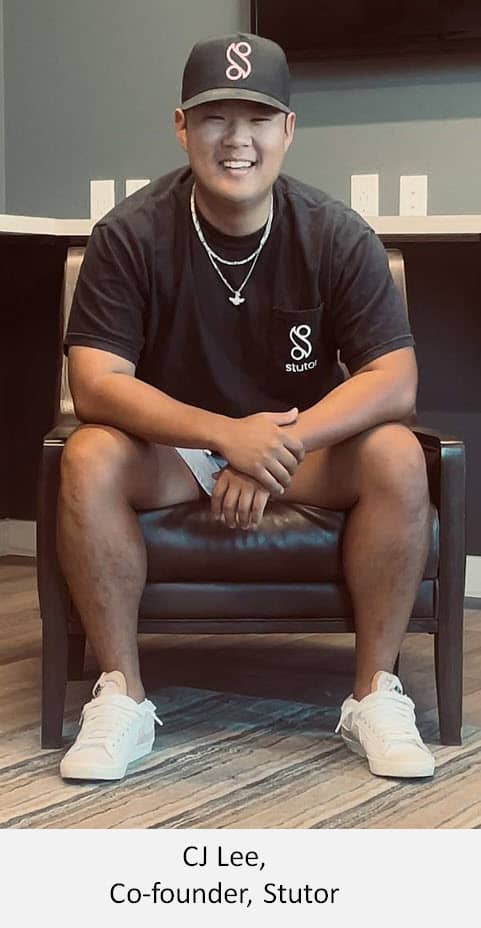 Lee felt like he couldn’t be the only student athlete feeling this way. He started talking to other student athletes and found that most of them were in the same situation — their busy schedules kept them from doing as well in their classes.

Students in general tend to have a packed, unpredictable schedules, he explained. It can be hard to find time to go to lab hours or office hours for their TAs and professors. And when it’s late at night and there’s a test in the morning, it’s impossible to find professional help. Students often turn to other students for casual tutoring.

And if your friends can’t help you, they ask their friends, and so on—creating a tutoring network, Lee explained. His idea was to centralize that network and streamline the process for connecting with it.

Tutoring, he pointed out, has been around since students studied under philosophers in Ancient Greece. And even though it was fairly easy to find a university tutor or a local tutor, it usually took days to set up an appointment, and even then it wasn’t usually someone around his age who had taken the exact class.

He asked himself, with the technology available now, why is it so difficult to find instantaneous tutoring help that caters specifically to the student’s need?

“We just like to say we're revolutionizing and bringing tutoring to the twenty-first century,” he said. “Every industry thrives in the modern day because they adapt to the current generation. Why is it that the world of academia is always one of the last?”

Even the most organized student might realize that they need help with a specific problem set or assignment immediately, even if it’s 1:00 a.m. And there’s probably another college student who is awake and available to help, if they can just be connected.

In those cases, a three-day waiting period just won’t cut it.

Once he got the idea for a network that would digitally connect students with peer tutors, he decided to see if anything like it already existed. To his surprise, it didn’t.

He believes the reason this doesn’t exist yet stems from the unchanging, rigid nature of academia. He added that there’s also a stigma that you have to be a brilliant scholar to help tutor someone.

In his opinion, tutors don’t have to be the top student in the class or have a 4.0 GPA. Lee thinks the most efficient way to tutor a college student is to connect them with a college student who has been in their shoes, in the same class at the same university. 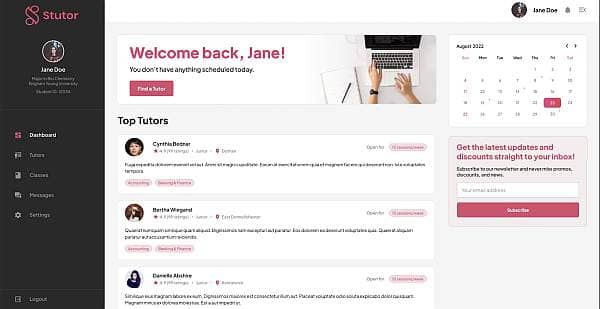 Based on Lee’s market research and personal experience, most students don’t care if you aced the class. They care that their tutors have been in the class and can walk them through it. Getting a B in the class is good enough to tutor for Stutor.

After Lee graduated, he went on to play professional golf until 2020. Then he returned home and the pandemic shut downs began. For the next several months of lockdowns, he decided to pursue the idea and reached out to his friends who were developers. They all wanted payment upfront or were busy.

In early 2021, he sat down at a bakery with Joel Joseph. Overall, he just felt good about Joseph even though he was nervous to hear yet another no. Lee laid out the situation for Joseph. Joseph told Lee that he was in. The duo sent out a survey of a thousand students from various universities. The survey explained the app and asked if the students would want to download it. Almost all (99.8%) of respondents said they were interested in the app and would download it. “And so I said, you know what, Joel? That is all the proof I need. Let's get going,” Lee said. 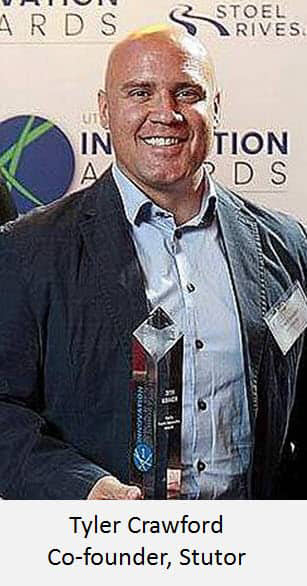 Then he met Tyler Crawford, who has sold four companies with successful exits. Crawford seemed interested to help but wasn’t ready to step down from his company just yet. Crawford traveled to Boston to tour Harvard and MIT campuses with his daughter who was checking out colleges. He saw bulletin boards full of tutoring ads with tear-off bits of paper at the bottom with the tutor’s contact information. “That’s crazy that Harvard and MIT—arguably the two most thought-leading schools in the world—are still practicing the paper tear off method,” said Crawford.

Crawford accepted the role of cofounder and stepped down from his company. “CJ as a founder and person in general and Stutor as a company were both so exciting and refreshing to me,” Crawford told TechBuzz. “CJ is humble, but exceptional at the same time and the idea of Stutor immediately resonated with me. I am so excited to be involved and working alongside CJ to bring Stutor’s mission to life. Stay tuned, this is going to be one fun rocket ride!”

The team started developing the app in January of this year and “have gone very far, very fast,” Lee said. The app is built for four groups: regular students, student athletes, student tutors, athletic administrators and parents. For the regular student body, the app is free to download and is pay as you go. Stutor takes a miniscule transactional fee relative to other Peer-to-Peer platforms.

The student athlete portal has a flat-rate premium membership that allows for many features which include recorded video sessions when the athlete receives a session. Athletic administrators can receive the video recordings, metrics and ratings to see how the tutoring sessions are going for their athletes. Students with a busy schedule who need a side gig can put the spread out three to four hours they’re free as their availability.

“We take care of all their scheduling, we fill their pipeline with tutors, and we create this instantaneous help for a tutor,” he said. “We'll teach them how to run what is essentially their own little business.”

Parents also have a portal to access metrics and drop money directly into the student account so it can’t be used for anything else.

Once the app launches for BYU and UVU students in November, the team hopes to dial in the process and then create a centralized tutoring network at every university. Lee is excited they already have a lot of universities lined up nationwide. Eventually Lee hopes to connect student K–12 to tutors. He hopes to connect college students to tutor high schoolers and help them with ACT prep, as well as to connect graduate students to undergrads in their field.

“Eventually, we know this thing is going to explode pretty quickly,” said Lee.

Jenny Rollins is an award-winning writer, editor, and content producer. Jenny is a senior editor for Business.org and manages her own freelance writing and editing business stories.