This is part four of a series on Utah's Polynesian entrepreneurs. See parts one, two, and three.

Rob Poleki, Founder and CEO of Washie, is not a conventional entrepreneur. From asking his waiter to take him to China, to wheeling a toilet seat around the CES crowds in Vegas, Poleki plays by his own rules to drive results.

Poleki was born in New Zealand. His parents worked hard to save money, get green cards, and move to Hawaii where Poleki grew up. His parents’ sacrifice motivated him to always do his best and excel even when it wasn’t comfortable. In 1999, Poleki moved to the mainland to play football for Idaho State University, and became the first college graduate in his family.

After graduating and settling in Pocatello for about 20 years, Poleki moved his family to Utah to expand his startup, Washie.

Washie is a smart toilet seat that dispenses an alcohol based cleaning solution to clean the seat before use. The seat also connects to an app, alerting staff when a cartridge needs to be refilled or a battery is low.

The idea for Washie came to Poleki in 2015 at the Salt Lake City Airport, when Poleki took his four year old son to the bathroom before a flight. The airport was bustling with people, and in the only available stall the seat was dirty. Poleki put down a toilet seat cover, but his four year old was not impressed and started throwing a fit. Poleki had to grab paper towels with soap and clean off the seat before his son would sit down.

“Everything in the restroom is hands free to eliminate germs, except the most important thing, and nobody likes these toilet seat covers,” says Poleki. “I put that on the list and thought, ‘Okay, I need to solve this problem one day.’” 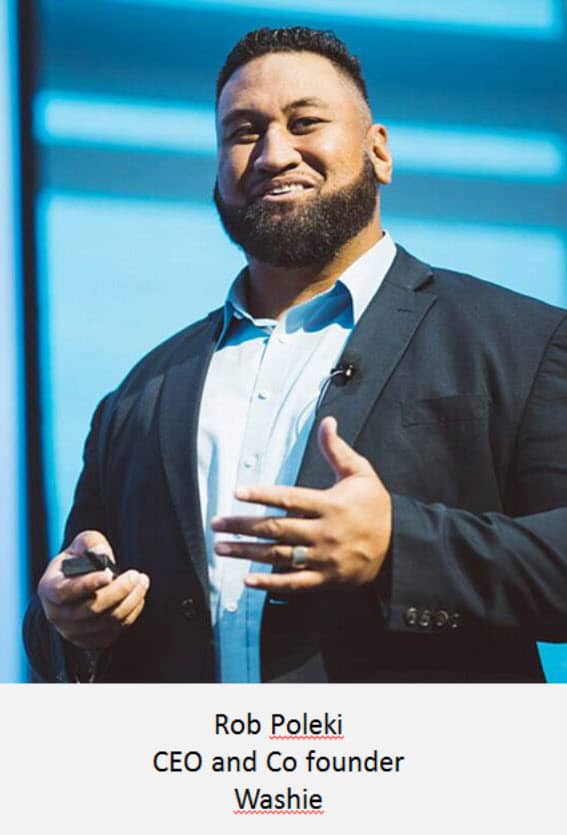 At the time, Poleki was in a government position in Pocatello. In 2013 he became an elected official, serving as the Bannock County Clerk until 2019.

Poleki worked on a prototype and was issued his first patent in 2018. He then drove to Las Vegas for the Consumer Electronics Show (CES), one of the most influential tech events in the world.

“I was in my car in the casino parking lot, I had a toilet bowl on a push cart and I was so embarrassed to wheel it in the casino,” says Poleki. “I couldn’t believe I was about to push this toilet bowl into the Venetian hotel with thousands of people walking around, in the middle of CES. I almost didn’t get out of the car. But I thought, ‘I drove this far, so I’m going to do it.’ I pulled out my invention and received the opposite reaction. Instead of being embarrassed, hundreds of curious people came up to me asking ‘What is that?’ I received so much attention.”

Poleki also made it to the last round of cuts on Shark Tank. The producers loved the product, but found out Poleki was an elected official running for office. This was against the Shark Tank participant rules. Poleki was faced with the decision to quit his job or quit the show.

“I quit [my job] in 2018. I gave it up. I was running unopposed, and I could have stayed in that position until I had retired… but I thought there was something else out there for me,” says Poleki.

But then, two weeks before the show, Poleki was cut. He described the moment as the first and biggest “punch to the gut” as an entrepreneur. Like other determined founders, Poleki picked himself up and kept going.

Poleki looks back and believes that quitting his secure job was the best thing that ever happened, allowing him to give 100% of his efforts to his startup.

After being cut from Shark Tank and quitting his job, Poleki bootstrapped Washie, cashing in his 401k and putting $100,000 of his own money into the company.

In 2019, Poleki knew he needed a manufacturer, but was unsure where to start. His only connection to China was a casual acquaintance with his Chinese server at a local Chinese restaurant. Poleki decided to ask the server to take him to China. The man agreed and three weeks later they booked tickets and left.

It was the “best trip of my life,” says Poleki. “He was my trip coordinator, my security guard, my translator, and we found our manufacturers… Now we’re really good friends. My kids call [Kevin] Uncle. He’s always over, and we go to his restaurant to eat all the time.”

Poleki has raised a pre seed round with undisclosed local investors in Idaho and Utah. In 2018 Poleki partnered with Dane Simmons Jr. as a co-founder of the company. Simmons and Poleki played college football together at Idaho State University. Simmons owns several businesses in southeast Idaho and founded Simmons Surgical, a successful orthopedic distribution company. Simmons is VP of Sales for the company.

In February 2021, Washie had a soft launch in the Bingham Memorial hospital in Blackfoot, Idaho. In the next month, Washie toilet seats were put in the Pocatello airport, the Boise Event Center, Boise Chamber of Commerce, Huddle Co-working Space, Downtown Station Square (Boise), and more.

The soft launch was essentially a beta test, and allowed Poleki to smooth out kinks in the product experience. The team quickly learned that the sensor allowing the cleaning solution to dispense was failing and had to be replaced by hand. Poleki personally replaced about 200 sensors in seats around Idaho. The setback was a learning process for the team, and helped them know how to fix the product before the official launch. 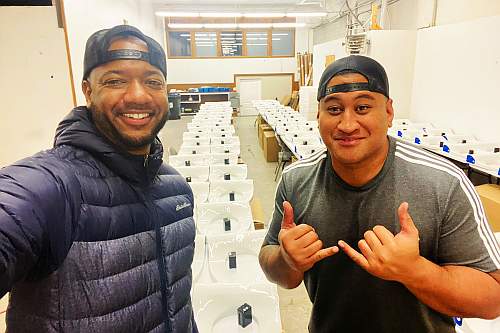 The pandemic caused manufacturing overseas to stop, creating another barrier for Poleki. For 8 months, seats could not be manufactured. As they waited for shipments to come, Poleki pivoted into the sanitizer business. The company developed a high end 80% alcohol sanitizer that smelled great and did well until the market became too saturated with sanitizers.

“This was a good period to test and make improvements on our seats,” says Poleki.

Despite the setbacks, Washie toilet seats have now been on the market for 8 months. 2021 was the first year of revenue, with almost $100,000 in seats sold.

Poleki’s next plan is to launch in Utah. In August, Poleki moved his whole family to Utah and has a space at Kiln 1 in Lehi.

“The reason I moved here is because everything we do is in Utah… We have our fulfillment center in Springville, and chemicals [an alcohol cleaning solution for the seats] made in Ephraim,” says Poleki. “There is also so much business, so much opportunity here, I had to move here… and things are going great for us.”

In Utah Washie Seats can be found in the Salt Palace Convention Center (you may have seen them during their debut at the Silicon Slopes Convention), BYU Marriott Center, and the Mountain America Expo Center.

Poleki plans to sell the next 1,000 seats here in Utah. He also plans to partner with janitorial distribution companies across the US. Next, Poleki hopes to expand internationally, as the company already has distribution partners in Canada, New Zealand, Australia, Brazil, and parts of Europe.

Poleki is also working on a residential model which he hopes will be out in the next year.

In an article on LinkedIn called, “The Polynesian-American Dream”  Poleki noted, “Our [Polynesian] ancestors possessed the most important CEO qualities and were grand examples of bravery, innovation, exploration, and accomplishing the impossible. We come from the DNA of fierce warriors and master voyagers of the largest ocean in the world, the Pacific. How can we as Polynesian entrepreneurs and future CEOs not succeed when we have such great examples of success!”